What predators do bumblebees have?

Bumblebees have many predators, some of which are mammals and birds. These predators have co-existed with bumblebees for thousands of years and are not a cause for conservation concern – it is the human caused problems like habitat loss, pesticide exposure and climate change which make natural predation more of an issue for bumblebee populations.

The main mammalian predators are badgers, which use their strong claws to dig up nests and eat the larvae and food stores. Sadly, bumblebee nests do sometimes get destroyed by badgers, and often the attacks are only realised when it’s too late. But we find that you can protect vulnerable nests by covering them with something that the badgers can’t get through, but which the bees can. Some people have used metal grids like in the photo above, but you could use anything else similar, and just cover it up with some plants so that it isn’t too unsightly.

Birds often eat adult bees that are outside of the nest. In particular, robins and great tits have been found to catch bumblebees, rub them on branches to remove the stings, and then to peck out the insides!

Other predators and parasites are wasps and flies, many of which lay their eggs inside live bumblebees or bumblebee nests.

Spiders also eat bumblebees—for example the Crab spider hides on flowers, waiting for insects to come along to feed. It then grabs them with its front legs, and injects them with venom that causes paralysis and a quick death, before sucking out the contents of the body. The photo below shows a crab spider attacking a honeybee. 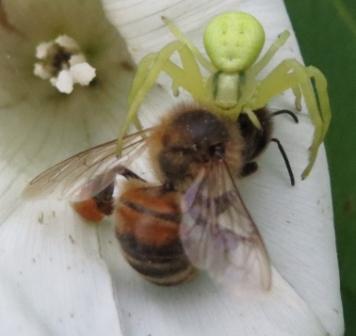