Each year, people get in touch to ask why they are seeing bumblebees visiting curled up leaves on flowerless hedges and trees like beeches and apple trees.

These plants have fallen victim to sapsucking aphids, the winged adult forms of which are familiarly known as blackfly or greenfly. These plant-fluid-feeders happily consume the lifeblood of the plants and excrete volumes of sugary liquid waste, known as honeydew. It doesn’t take long for aphid populations to explode and as a result there are swathes of other animals that gather to either consume the aphids themselves or their sugary secretions. The best example are ants, which go as far as to protect aphids from other predators and essentially farm them for the sweet liquid they produce. Bumblebees will also opportunistically feed on the sugar-rich honeydew, which provides them with carbohydrates, in a similar way to nectar. 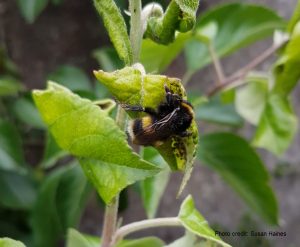 We often receive at least a couple of reports of this fascinating behaviour each year, but in some years we receive many more reports than usual. These are the years in which conditions are ideal for aphids – usually preceded by an overall warm year with a mild and wet winter.

What is really interesting is that many of the gardens that people witness this behaviour in are full of bee-friendly flowers, which essentially means bumblebees are not resorting to feeding from honeydew due to a lack of food availability, but are choosing to consume the honeydew over nectar. Bumblebee colony success is all down to energy-economics and bumblebees naturally attempt to collect food as efficiently as possible, so it may be that during these aphid booms there is an easier, larger or more energy-rich fast-food on offer in the form of honeydew that bumblebees can take advantage of.

There have been some concerns that the sugary sap may contain harmful toxins, however bumblebees tend to be good at avoiding things that are toxic to them and will generally avoid flowers that might harm them. This interesting behaviour has likely been going on for millennia, so even if the secretions do contain toxins, bumblebees might have already evolved the ability to tolerate them, as they have with some plants.

One thing that honeydew cannot replace however, is pollen, which provides the essential protein for growing larvae into adult bees. It is therefore unlikely we will see bumblebees switching from flower foraging to aphid farming any time soon.