Posted on November 4, 2014 by dcbcomputing 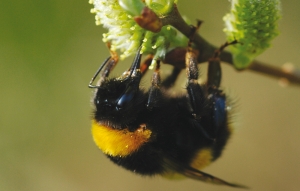 The Bumblebee Conservation Trust (BBCT) welcomes the launch today of the National Pollinator Strategy for England having spent many months working closely with Defra, Friends of the Earth, researchers, scientists and other NGOs on its development.

Lucy Rothstein, Chief Executive of Bumblebee Conservation Trust comments: “The Government’s National Pollinator Strategy highlights the need to improve and increase habitat for vital pollinators such as bumblebees. The Bumblebee Conservation Trust is set to play an important role working with more landowners, local authorities, businesses and the general public to create areas for our pollinators to live and feed. We fully support the Government’s call for action and urge people to get involved”.

Bumblebees have been in long term decline for several decades now – one of the main reasons being the loss of our wildflower-rich habitats. Two species of bumblebee have become extinct during this time and there is now an urgent need to stop any further extinctions. These precious creatures not only pollinate wildflowers but many of our fruit and vegetable crops – apples, strawberries, peas and tomatoes. Ensuring their long term survival is therefore critical for crop pollination as well.

BBCT has been closely involved in the development of the Strategy and is especially pleased to see that the final document contains two amendments based on the Trust’s consultation response:

• an emphasis on working with local authorities to create habitat for pollinators; and
• more stringent monitoring of imported bumblebees used for commercial purposes.

BBCT is already active in both of these areas and in a recent survey of local authorities found that 63% of those responding had introduced a variety of strategies to encourage pollinators: from the management of cutting regimes and grass verges to planting schemes with wildflowers or cultivated plants. BBCT will continue to expand its work in this area and would encourage anyone with an interest in approaching their local authority about bee-friendly planting to download its Local Authority Pack for guidance (click here to download pdf).

BBCT would now like to see the Scottish Parliament follow the lead of England and Wales in drawing up a National Pollinator Strategy for Scotland.

The Bumblebee Conservation Trust is a UK based charity that was established because of serious concerns about the ‘plight of the bumblebee’. In the last 80 years bumblebee populations have crashed and two species have become extinct in the UK, although the Short-haired bumblebee is currently the subject of a reintroduction project – see www.bumblebeereintroduction.org for more information.

Many of the remaining species have declined in their geographical range and abundance, including two species listed as ‘vulnerable’ on the IUCN’s 2013 European regional assessment. BBCT is addressing these concerns with a mixture of direct conservation measures and advice to businesses, farmers, landowners and the general public; scientific monitoring (BBCT runs the only British standardised survey of bumblebee abundance and distribution); and public outreach (aimed at raising public awareness of, and engagement with, bumblebee species).