Bumblebees of the world would not be complete without delving into the darker side of bumblebee life, and so this month features one of around thirty described parasitic cuckoo bumblebees, the Red-tailed cuckoo (Bombus rupestris). 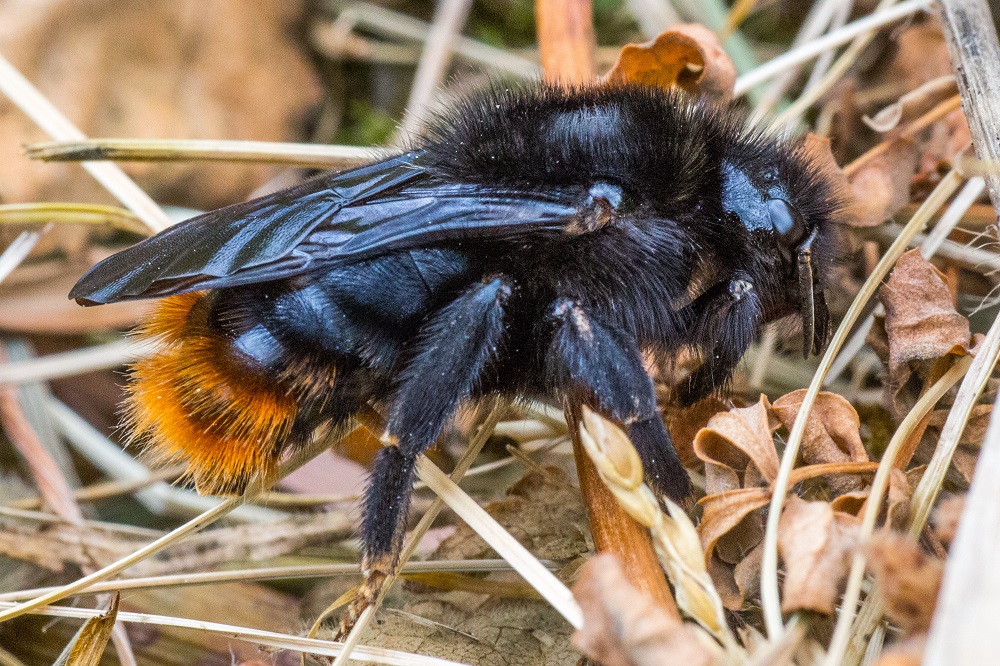 Colour pattern: In Britain, females are black with red tails, similar to their host species, the Red-tailed bumblebee (B. lapidarius). However Red-tailed cuckoos are much sparser haired, lack pollen baskets, have large box shaped heads and distinctive black/blue wings. Some females have a faint yellow band which can be seen at the collar. Males can be variable, however usually have a faint yellow collar and bands across the midriff of the lower thorax and upper abdomen, with a red tail. Yellow-banded female forms are found in Asia. 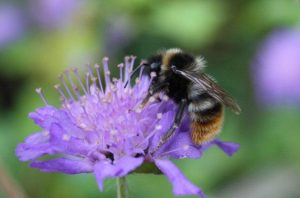 For those that have not heard of cuckoo bumblebees before, they are a fascinating group of bumblebees which have evolved to take advantage of the hard-working nature of social bumblebees. Unlike social bumblebees, cuckoos have no workers of their own. Instead the cuckoo female invades the nest of a social species and either kills or enslaves the resident queen, before using the resident workers to collect food and help her raise her own brood.

In this case (in Britain), the Red-tailed cuckoo will emerge from hibernation between April and June, around six weeks after the first social Red-tailed bumblebee queens have emerged and started setting up their colonies. Timing is key in the world of the cuckoo bumblebees as they search out an established nest. They want to take over a nest which has grown strong enough to raise as many offspring as possible, without being too strong for the cuckoo female to gain control. Once she finds a nest, the cuckoo lies in wait and often digs down into the nest material whilst trying to remain unseen. It is thought she does this to try and take on the scent of the nest, and perhaps to wait for the ideal time to make her move. If the workers and their queen find her, they will attempt to kill her or at very least evict her from their territory. This is the fate for many cuckoo females and nests are often strewn with the carcases of failed usurpers. Nest-stealing behaviour is not limited to cuckoo species though, and many later emerging social queens will also attempt to take over nests of other bumblebees to gain an advantage.

Cuckoos, however, have evolved to be nest-stealing specialists, built for fighting, and once in a position to enter a nest with minimal challenge, they use this to their benefit. Harder exoskeletons, the segments of which fit tightly together (unlike social bumblebees which excrete wax from these points), more powerful mandibles, and a longer sting eventually prove too much for the founding queen, and if she is not killed off she may become subservient to her oppressor, acting in the same manner as her daughter workers.

The workers she leaves behind will continue to forage and provide for the nest, however they will be helping to rear the cuckoo’s brood. The new cuckoo queen keeps her recently acquired workforce in check with the use of pheromones and aggressive behaviour. Any remaining eggs and young larvae are promptly destroyed, although those that are close to adulthood are spared to join the workforce. Some of the original workforce may go rogue and start to lay their own unfertilised eggs, however the new overlord is able to test the eggs to check if they are smooth or ridged. All cuckoo eggs are ridged, which is a useful characteristic for the policing intruder. Any smooth eggs are swiftly devoured. Unlike their social counterparts which lay between 8 and 16 eggs per clutch, cuckoos can lay batches of up to 20-30 eggs at a time, which is important as they only have a limited period of time before their workforce dies off. These eggs are reared into new male and female cuckoos, which then leave the nest to find a mate, before the fertilised females go into hibernation. The cycle then repeats itself in the following season.

After learning about this bumblebee underworld, many people decide they do not like cuckoos and we are often asked if anything should be done to prevent them from invading bumblebee nests. Some people have even gone as far as to devise novel nesting boxes aimed at preventing cuckoos from entering. However, this is not necessary or advisable. It is important to remember that these social parasites are intrinsic parts of nature too and several species are now critically rare due to unrelated declines in their host species. Human-caused drivers of population declines like habitat loss, pesticide use, disease and climate change are the things we should focus on tackling, rather than these naturally evolved brood parasites. There is so much more to discover about these intriguing invaders, but maintaining healthy bumblebee populations by addressing those human-caused problems is key.