Last summer I found myself on the Bumblebee Conservation Trust website, looking at the map of project sites and thinking “I bet I could cycle to all of those”. I’d never cycled for more than a day at a time. A year later I set out to join these places by pedal power over the course of a month. This cycle tour came at the end of three years spent studying Biology at Oxford University, and it was incredible to see how the science I’d spent years learning about was put into practice by the Trust. 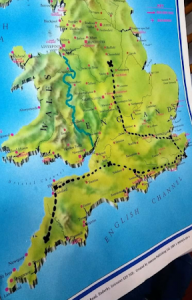 As well as the cycle ride itself I also collected interviews with people involved in invertebrate conservation along the way. In Oxford I spoke with Daisy Hughes about her research into the impacts of grazing on bee and plant diversity and the value of “letting go of the idea of tidy” by leaving lawns to grow and dead wood to lie. I then met with Charlie Hackforth who has been leading citizen science projects to monitor bee and butterfly populations. We spoke about how photography had sparked his interest in invertebrates. We also discussed the impacts of climate change on invertebrate populations and how the choices we all make in our diets and transport can help to reduce this. 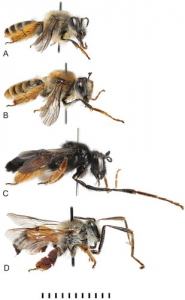 My final interview in Oxford before setting off on the cycle trail was with Dr Tonya Lander and her masters student Emma Eatough. Both are working on the ambitious Oxford Plan Bee Project to better understand solitary bee populations in urban and rural environments. Tonya told me about the incredible bee genus Rediviva found in South Africa. These bees reach their inordinately long front legs down the long spurs of various flowers to collect oil which they use to waterproof their underground nests. The pairing of these bees with flowers of matching spur length demonstrates the incredible adaptation of species to one another.

On Monday 24th June, with my chunky red bike in tow, I caught the train to Hathersage in the Peak District to meet Sally, Andy and Rhodri from the Pollinating The Peak project. The ride began with half an hour straight up hill to the moor where we were meeting. I was struck by the short, overgrazed bilberry plants compared to those I had seen in the Scottish Highlands the previous summer. A few months ago the team here had, with a group of volunteers, set up a series of cages across the moor to protect young bilberry plants from grazing, allowing them to come to flower. These plants are an important food source for the rare and declining bilberry bumblebee. After I set off again I passed Andy and Rhodri at the nearby Longshaw Estate where they’d found some bilberry bumblebees. 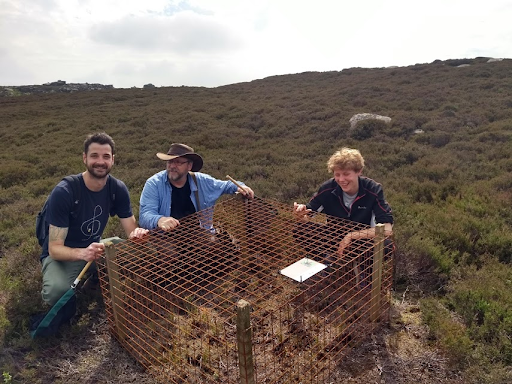 Andy, Rhodri and I with one of the many bilberry cages across the moor

After three days ride south I returned to Oxford to lead a bee themed gardening session with the incredible charity KEEN. The KEEN allotment is a brilliant place for people and wildlife (though sadly hasn’t managed to produce the sausage and bacon trees requested by one regular gardener). Research published by Dr Katherine Baldock at Bristol University this year shows that allotments are, per hectare, the most important contributor to the strength of plant-pollinator networks in urban environments. 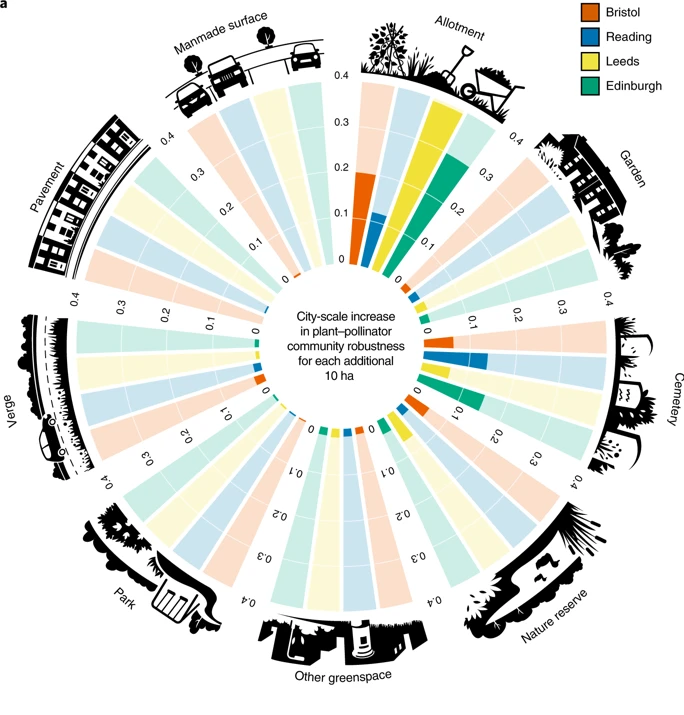 As I headed along the Thames from Oxford to North Kent I passed a series of flower rich “bee road” verges that have been encouraged by some local councils. I probably spent too long looking at these as my chunky little bike and I sped along busy roads. 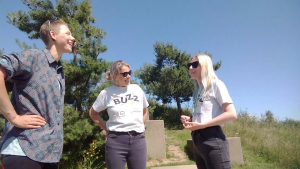 Emma, Kate and I discuss the Making a Buzz for the Coast project

In Kent, “The Garden of England”, I met with Trust staff Kate and Emma from the Making a Buzz for the Coast project. We were lucky enough to find a Shrill carder bee, one of England’s rarest bumblebees, at Milton Creek Country Park. We spoke about how wildlife conservation has shifted from single species protection to a focus on whole ecosystems. Even with their focus on the Shrill carder the Making a Buzz for the Coast project team are always thinking about the positive impacts they can have for a broad range of species. We chatted about the community and achievement found in volunteer work as well as the need for the Trust to collaborate with local tourist, farming and forestry industries, local councils and other wildlife organisations.

My next stop was heading down through Kent to meet Dr Nikki Gammans who has been working with the Trust in Kent for the past 10 years to reintroduce the Short-haired bumblebee back to the UK. She told me that to begin with she would often be asked “How do I get rid of bees?” at community events. Now she’s much more likely to be asked “How can I encourage bees?”, nature and people rather than nature or people.

I headed west along the south coast where half an hour of pushing my bike uphill into Hastings cured me of the delusion that all coastal towns are flat. In Hastings I spoke with the Quaker meeting about my journey and heard a wonderful story of a lavender bush covered with sleeping bees. These were probably males who leave the nest to find mates and drink nectar, not returning with pollen for the grubs like their female siblings (making no comment about humans here of course). 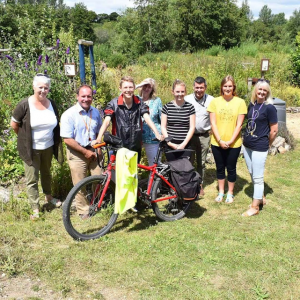 A few more days west along the coast and I reached the southern HQ of the Bumblebee Conservation Trust in Eastleigh. It was great to meet the Media/Comms and Fundraising team as well as CEO Gill Perkins (and her delicious brownies). Even in these office based roles there was a wealth of scientific and ecological knowledge as well as those from careers completely different to wildlife conservation. After Eastleigh I was on the home straight, stopping off at home in Wiltshire to eat, sleep and do a job interview (which amazingly I got) before hitting Somerset, Devon and Cornwall. 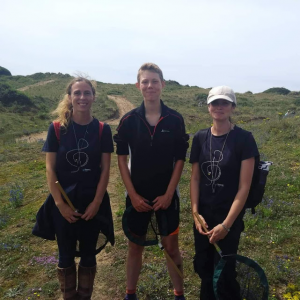 Heading onto Braunton Burrows for a day of identification training with the West Country Buzz staff, Daisy and Cathy

Heading over the Quantocks and Exmoor into Devon was the toughest day of the tour and although I made the nauseating mistake of excessive chocolate consumption I made it over to Barnstaple, joined by my uncle. The next day I headed to Braunton  Burrows for a bumblebee ID course run by Cathy and Daisy from the West Country Buzz project. Out on the extensive dune system at Braunton Burrows a large group of volunteers were getting to grips with netting and identifying bumblebees (though the most common species can generally be separated by sight). We were all very excited to find five Brown-banded carder bees (though we continued to optimistically misidentify them as the even rarer Moss carder bee). 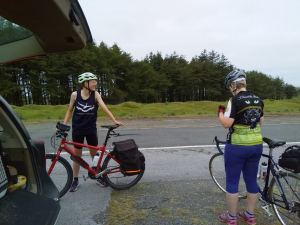 On the 22nd of July, four weeks after setting off from the Peak District, I headed into Cornwall where my aunt put me to shame over the hills (I’d like to take the defence that my legs were substantially more tired). I’d expected the entire county to be full of deck chairs and tourist shops selling ice cream but instead spent hours meandering across desolate moor land. There was one final push uphill as we reached the end (the only hill I made it up faster than my aunt) and then I’d made it! We finished at the Duchy of Cornwall Nursery where they’ve been working with the Trust to create an amazing bumblebee garden, combining traditional gardening aesthetics with an embrace of wildlife. Did the amount of cake I ate in their cafe make me feel ill? Yes. Did I then proceed to eat my entire body weight in chips for dinner? Absolutely yes.

Along the journey I stayed with friends, family and strangers and I couldn’t be more grateful to these people. From the baby in Chesterfield who gave me a tour of the town in “ga”s and “da”s to the retired forester in Waterlooville who taught me about the trees that signify an ancient woodland — thank you all. 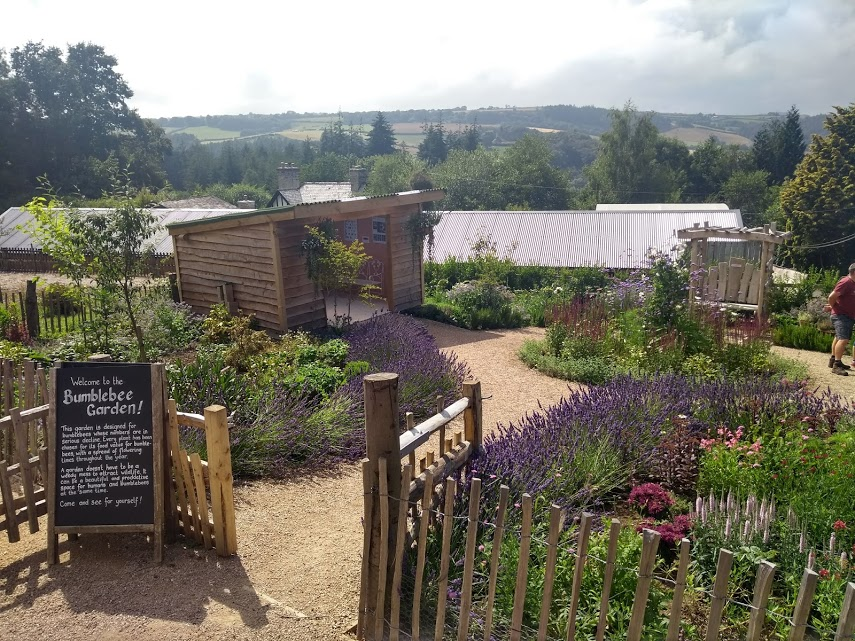 The Bumblebee Garden at the Duchy of Cornwall Nursery

Ro has raised £265 so far for the Trust. Show your support here.