This guest blog has been kindly written by Katie Morrison, a recent graduate from Aberdeen University. Katie received a first class grade for her honours thesis in which she investigated how farming practices in the Outer Hebrides impact on bumblebee diversity and abundance. Here she tells us about her findings.

Bumblebees are endearing and charismatic. It is, however, no secret that bumblebees are coming under growing pressure from intensive farming practices throughout Britain. But nestled in the North-West corner of Britain in the Outer Hebrides, rare bumblebees including the Great Yellow (extinct across England & Wales) and Moss Carder are thriving!

The machair of the Outer Hebrides might be unfamiliar to you. Machair (a Gaelic word) is a beautiful coastal habitat consisting of an extensive, low-lying fertile grassland. Its shell based soil hosts a multitude of flowers throughout the summer but is nearly barren throughout the winter. The floral display is unique across the world hosting some rare orchids, making it a precious habitat globally. 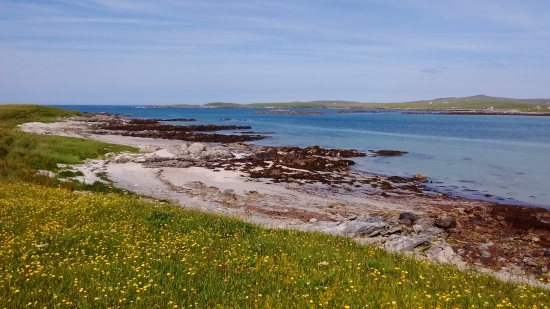 Intensive agricultural is not possible in the Hebrides because of the tough climate (do not be deceived by the idyllic scene above)! The Hebrides is dominated by crofting, a traditional family farming practice carried out on small areas of land, mostly consisting of grazing regimes and rotational cropping. The machair plays a key role in this system.

Coming from the Hebrides and having a love of its landscape as well as bumblebees I based my Honours Thesis on this relationship between the people, the land and the bumblebees. The aims of this investigation were to see if there is a substantial difference in bumblebee abundance and diversity between machair sites and if this is primarily driven by flower patch abundance or wider management practices. The patches of flowers focused on were Red and White Clover as well as Kidney Vetch.

Three machair sites in the Outer Hebrides were selected for study. These were Eoropaidh (pronounced Yorpay) and Barvas on the Isle of Lewis, as well as Balranald on North Uist.

My investigation took place in July 2016. This was to best match up when there would be the most flowers on the machair as well as the most bumblebees out and about. (The chances of good weather was a bonus!)

Associated management factors (grazing levels, rabbit abundance and flower patches) were paired for analysis with bumblebee numbers across the machairs, which were collected by counting bumblebees along fiixed transects. These transects covered 1km of the machair and were walked every day. 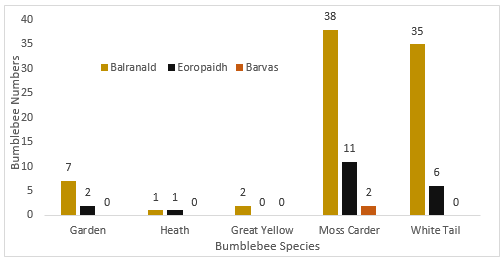 Bumblebees by species recorded at each site

The investigation highlighted that the composition of the flower patches was not actually that important for supporting bumblebee numbers or diversity! The data I gathered was analysed to within an inch of its life. Literally weeks were spent trying to understand why the foundation of these bumblebees’ lives seemed to be almost irrelevant on the machair. The answer was in the bigger picture. The land management and crofting traditions which were followed on the different sites were fundamental to the greater number of bumblebees found at Balranald compared to the Lewis sites.

Just like the islands of the Outer Hebrides each crofting township has its own character and tradition. However, Lewis generally has a more modern crofting practice driven by sheep production, whereas North Uist is dominated by traditional crofting which uses the machair to grow cereal crops alongside sheep and cattle production. This is particularly prevalent at Balranald because of its status as a nature reserve. 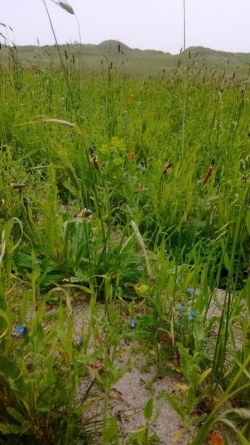 This changes the nature of the machair landscape on North Uist for the better. In the scientific literature, there is a focus on the need of a varied landscape for bumblebees to enjoy. This is where flowers varieties are mixed over time and space. The traditionally cropped machair helps guarantee this despite the loss of natural patches of the most used species (Red and White Clover as well as Kidney Vetch). Planting flowers such as ox eye daisies or wood forget me knots in the barley and rye helps enhance the landscape. New and different plants grow in fallow patches (areas used for crops in the past) which greatly increases the diversity of plant life available for the bumblebees.

The species richness (how many different flowering plants were found) of Balranald was almost double that of Barvas but the bumblebee abundance was 42x as many! 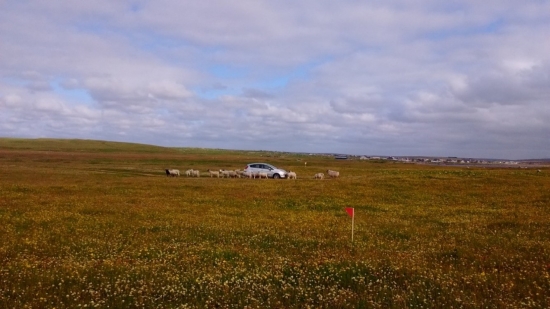 Cropping the machair also helps control grazing. Grazing has a negative impact on all flowers, hence the bumblebees. Sheep are particularly bad for this. They will eat the flowers before they are fertilised meaning they cannot produce seed, lessening the number of flowers that will be available next year, as well as straight away. Summer grazing is particularly negative and I noticed this most at at Barvas.

Rabbits were present across all three sites. Rabbits are particularly destructive on the machair because of their grazing and their burrowing which causes instability. I fell down several burrows and nearly got mowed down by a terrified rabbit in Eoropaidh which was totally overrun by rabbits! 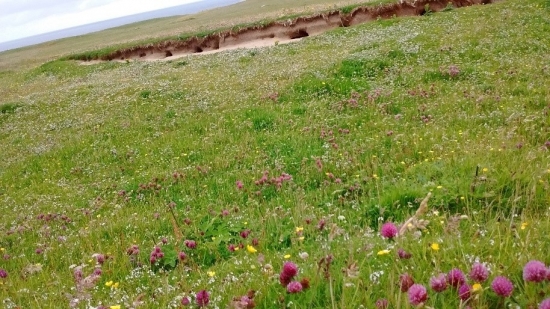 Bumblebee success on the machairs of the Outer Hebrides is primarily based on the traditional crofting practice working in tune with the natural habitat. The foundation of the machairs success is its wide diversity of flowers and suitable habitat. When negative impacts of grazing of both rabbits and livestock are controlled, bumblebees can thrive and in turn, help the landscape to thrive.

Katie’s work has been published in the Hebridean Naturalist, click here to read the full report.