With so much concern around the use of pesticides in agriculture, it’s easy to forget that pesticides are regularly used in gardens. Pretty much anything designed to kill insects or ‘bugs’ can also kill bees, butterflies, ladybirds and whole range of insects that people like to see. So what’s the alternative for gardeners who want to control the pests that chomp their plants?

Before I go on, I should state that I am using the word ‘pest’ to refer to any animal that can do a lot of damage to garden plants. I certainly wouldn’t like to see aphids or sawflies wiped out, but I do like to control the damage they inflict to plants I’m growing.

I’ll begin by telling my own shady story. Before I worked at BBCT, I had a garden at home in Northern Ireland at my parents’ house. The gooseberry bush I had bought and tended had done well, producing its tiny white flowers in spring, which began to swell and turn into the reddish berries. But one day, something looked different. All of the leaves from some stems had totally disappeared, leaving the bald, spiky stems, as if winter had come early. I looked closer, and found that parts of the plant were literally crawling with tiny black ‘caterpillars’. I later found out that these were the larvae of the gooseberry sawfly – a well-known pest of gooseberry plants. The recommended course of action was to use bug spray, so that’s what I did. I remember that the bottle was covered in pictures of beasties. A line-up of garden fiends like vine weevils, aphids, whitefly, and our friend the gooseberry sawfly. 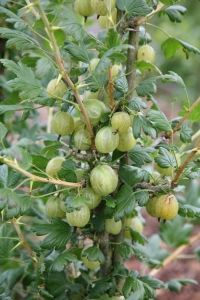 So I blithely sprayed the plant and the sawflies disappeared, and I felt secure in the knowledge that my gooseberry would survive. Fast forward two years later and I’m working at the Bumblebee Conservation Trust and hearing more about neonicotinoid pesticides killing bumblebees. Out of curiosity I looked up the ‘bug killer’ I had bought, and there it was in black and white: I’d been spraying my plants with bee poison.

The purpose of that story is not to try to assuage my guilt by confessing publicly, but to show how easy it is for well-meaning gardeners to choose products which are certainly useful, but which may have unintended consequences for wildlife. Even those which are described as ‘natural’ (such as anything containing pyrethrins) are harmful to bees – they are designed to kill insects after all!

This article is also intended to open the discussion on controlling pests without resorting to chemicals. Here are my top tips:

Encouraging natural predators: ladybirds and lacewings are some of the most voracious of predators, and their favourite food is aphids. You can encourage natural predators by providing homes for them or the foods they prefer. Birds will eat larger insects such as beetles and grubs, so provide places for birds to feel safe in your garden.

Picking off larvae: grubs of all sorts of insect pests can be simply picked off plants. That’s what I do with my gooseberry sawflies now, and I leave them in a little pile for the birds to feed from. This could be done for cabbage white butterflies, but I don’t have the heart to kill butterflies so I just let them eat my nasturtiums, which don’t seem to suffer much from it.

Companion planting: Planting certain plants can discourage pests by disguising the scent of their intended meal, or repelling the pests altogether. For example, planting carrots and leeks together is a classic combination, as the carrots repel leek moth, and leeks repel carrot flies. I don’t have space to go into all of them here, but there’s a good article on the BBC website here.

Non-toxic chemicals: Soapy water controls aphids well. Mix your own by using a teaspoon of washing up liquid in 3 litres of water. If you put this in a sprayer it knocks the aphids off the plants easily.

Physical barriers: horticultural fleece can be placed over your crops until the threat of pests has passed. This is especially useful for carrot fly, sawfly and butterfly and moth pests.

If you’d like to discuss gardening for bees, visit our forum by clicking here.