In this blog post, the Trust’s new volunteering and conservation assistant, Jack Reid, explains the research project he undertook during his MSc thesis.

Why I did the thing Bumblebees are a cute, fuzzy, and ultimately vital component of our modern world. They feature prominently in popular culture, advertising, and in the growth and lifecycles of many important crop plants. It’s hardly surprising that we want to keep them around.

And make no mistake: bumblebees are at risk, for many reasons. They’re up against all the usual hardships that tiny animals face, and then some. We (us humans) are not making their lives any easier. We’re polluting their (our) atmosphere, showering them with pesticides and other chemicals, fragmenting or outright destroying their habitats, and more. In short, we are – at least – significantly responsible for the difficulties bumblebees are facing.

Urbanisation is accelerating. This results in loss of the natural habitat that bumblebees love, and where it isn’t lost, it’s often fragmented: broken up into smaller pieces. Each of these pieces might only have a few of the necessary ingredients that a growing bumblebee colony needs. So it’s naturally important to make sure that bumblebees are able to get between patch A (which has a suitable nesting site) and patch B (which is full of tasty nectar flowers). This same effect is why you sometimes see animal highways over or under roads: so that they can move safely between patches without fear of the road – and the uncertainty – that divides them.

As adorable as our newly-shared mental image of a bumblebee highway is, it’s unfortunately not a practical solution. Bees don’t drive. So the next step must be to understand the effects of fragmentation on bumblebees, and what steps we can take to minimise it.

This is where my thesis comes in. Each of my sites were visited ten times throughout June and July 2017, to sync up with when the bees would be out and about. Ten-minute site walks were conducted through each garden, along a randomly-oriented 20-metre transect. During the course of each of these walks, I recorded the bees that I saw: specifically their species and abundance. I also took measurements of climate factors (temperature, light level, humidity, and wind speed); the dimensions of each patch; the dimensions of other patches within 100 metres and how close they were; the patches’ proximity to roads, footpaths and “developments” (buildings); and how often those roads and footpaths were used. Figuring out use of these developments had the potential to become a little bit of an ethical minefield, due simply to the fact that it would involve directly interacting with people. Following consultation with my project supervisor, we opted to stick with the bees.

The measurements I was most excited about (and I plead forgiveness for being excited about them at all) were the perimeter-area ratio (PAR) measurements, and something I called the site similarity index (SSI) measurements. The names, I assure you, probably make them sound far scarier than they actually are.

Here’s a handy diagram of a few pretend survey sites with different PARs. I’m going to refer back to this shortly.

Figure 1: Diagram of Theoretical Site Edginess: From left to right, Site A has a jagged-edged perimeter, where B and C have a mixed and non-jagged perimeter respectively.

The PAR is what you get when you divide the length of the site’s edge (perimeter, in metres) by its area (in metres2). The lower the PAR is, the bigger (generally) the site is and the less its edges are “disturbed” or jagged. Both of these things are known to be great for bumblebees.

This doesn’t perfectly predict size, per se. You might have realised this already, but the PAR is affected by how jagged the site’s edges are. This is because when a site’s edges are jagged (Sites A and B), the edge complexity actually makes the overall perimeter longer. Edge complexity (and therefore perimeter length) increases as chunks of that habitat are lost to fragmentation effects.

So now that we understand that the PAR is affected by both site size and fragmentation, we start to suspect that bumblebees – like many other animals – might prefer larger and less-fragmented sites to live in. More on that shortly!

The SSI is (alright, alright, I admit it) a little more complex, but (thankfully) not by much. For each of the sites I surveyed, it uses their PAR to tell us how similar the other sites within 100m of it are, by comparing it with their PAR. To get the SSI, you divide the main site’s PAR by the average PAR of its nearby sites.

Now that’s out of the way, I should probably tell you why I’m bothering to figure this out at all. The SSI is a proxy measurement: it’s a stand-in for something else that’s significantly more difficult to work with. When two ecosystems are of the same type (like bumblebee-friendly wildflower gardens), we might expect that if they’re similarly-sized, they contain similar habitat and resources.  So, if site A is useful to bumblebees, and is similarly-sized to site B, then we can estimate that site B is probably also useful to them. In addition to our measurement of habitat fragmentation and isolation, we now have a proxy measure of how useful nearby sites are.

Let’s get this thing back on track. SSI is just another ratio. For a rough idea of what it means, here’s a quick summary: if the SSI is 1, then the site and its surrounding sites very likely have identical dimensional characteristics (which is not very likely to occur in nature). If it’s less than 1, then it’s probably smaller and/or more fragmented than the surrounding sites. However, if the SSI is greater than 1, then it’s probably larger and/or less-fragmented.

Here are the formulae for the measurements I’ve been talking about:

Why did I pick out these two measurements? Well, because they’re easy.

I realise that makes me sound terrible. But here’s the crux of it: you can find out a site’s PAR and SSI in less than half an hour with simple tools and a calculator. If they’re useful for predicting how much bumblebees like the sites, then we’ve hit the jackpot. The point isn’t to find something easy for me. The point is to find reliable, useful, and easy measurements that can be used by people to inform urban planning in the future, enabling bumblebees to thrive.

This brings us neatly to the next part (wherein I prayed fervently that I had something valuable to show for it).

I asked a computer about the thing

For the purposes of interrogating the data I’d put together throughout my collection period, I ran it through R – a statistical analysis software package.

I’ll skim over the exact details of my analysis methodology. Suffice to say it took me a good several weeks – probably approaching two months, if I’m entirely honest – to get through the analysis. Statistics are something I struggle with and have no natural talent for, so I took the slow-and-steady approach (and asked lots of questions of people more naturally-talented than myself).

If no other pleasure was derived from it, I got my first “Eureka!” moment of my scientific career when I discovered a minor error in my statistical model that, through the course of my analysis, had snowballed and afflicted the overall results.

Once this was corrected, the statistical model suddenly yielded results that were not only interesting, but potentially useful, which is all that I’d dared hope for. Confetti dropped from the ceiling. Light cascaded down from the heavens and chimed with angelic chorus. Swarms of highly-coordinated bumblebees danced carefully-choreographed circles around me.

In reality, I continued to sit at my computer in the nest I’d constructed of scrap paper, notes, and data collection equipment. But in my own little corner of the scientific community, I was overjoyed.

What the thing means

Some of the results yielded from the breakthrough were – though expected – welcome reassurances that my data fit with our expectations about the world. For example, we found that bees are more abundant when roads are further away. Definitely no bee highways, then. 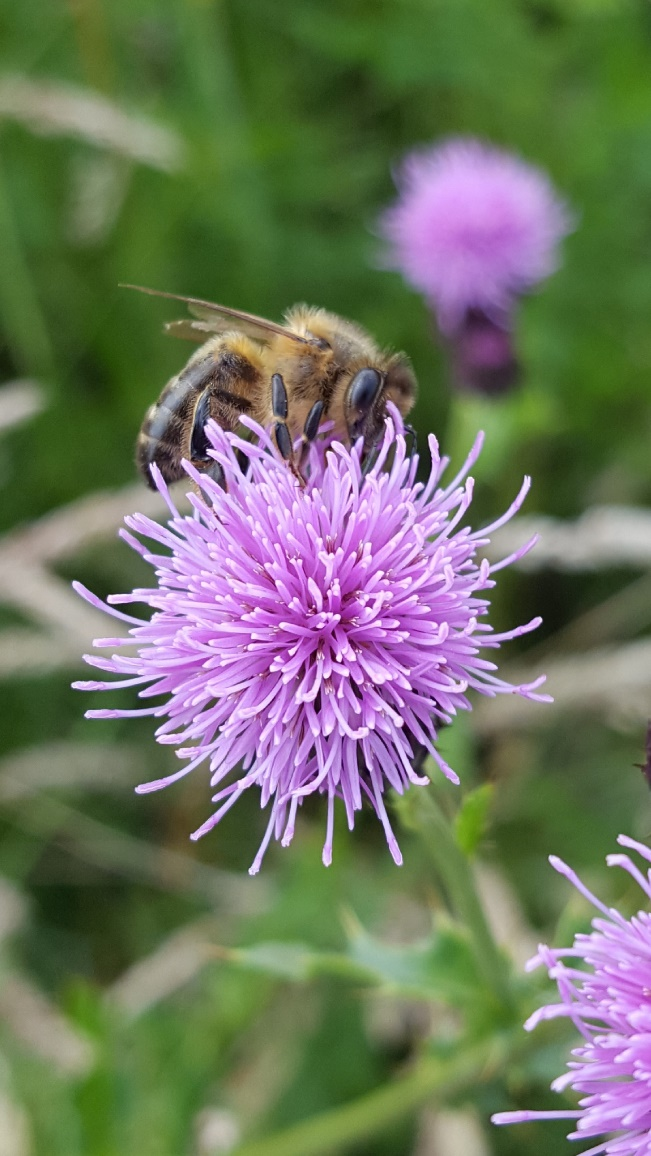 When I took a look at what a site’s SSI means for bumblebees, it turns out that there’s a huge improvement in abundance, but a much smaller improvement in diversity when satellite sites (the ones arranged around the main site) are larger and less-fragmented.

Because of how SSI works, we can say that basic similarity doesn’t mean a lot for bumblebees: the highest value for abundance and diversity doesn’t occur when the SSI is closest to 1. If it turned out that SSI wasn’t important, we might see no relationship whatsoever, or a straightforward linear relationship.

What I found is, in fact, a linear relationship: as the satellite sites get bigger, abundance and diversity improve. This means that similarity isn’t important, but larger surrounding sites of the same type are. It’s interesting, yes, and while it’s nothing new it hints at potential. Remember that the SSI is made of the PAR. So what this is actually telling us is exactly what I was looking for: that as the satellite sites’ PAR changes, bumblebee abundance and diversity change too.

I found that PAR being lower (indicating a larger, less-fragmented site) was associated very strongly with both improved bee abundance and improved diversity. This has potential to be useful to urban planners. Notably, minimising the perimeter-area ratio of urban pollinator-friendly gardens through planning for them to be particular shapes, or to occupy particular spaces within an urban setting, will enable bumblebees to be more successful.

Given the predictive power of this approach – and the ease of its implementation – it may be greatly assistive to urban planners. Where it isn’t possible to implement sites with shapes that minimise perimeter-area ratio, the creation of satellite sites with favourable site similarity indices may be useful.

Through the combined use of PAR and SSI, it may be possible to create a quantitative “scoring” system for proposed urban gardens based on bumblebee-friendliness. This may in turn inform planning further.