Posted on August 2, 2017 by dcbcomputing

For the last couple of years, we’ve been working with Scottish and Southern Energy Electricity Networks (SSEN) and its contractor Balfour Beatty at three new substation sites in Caithness. The substations are needed to carry the huge amounts of power generated from the recent upsurge in the renewable sector in Caithness, and also to replace aging plant. Balfour Beatty contracted an Environmental Consultant, Angus Spirit (Envirassist) to make recommendations and write a plan for the environmental improvement of the site after the substations had been built. Angus contacted me in 2015 as he thought the site could have significant biodiversity benefit for bumblebees and wanted to see if there was anything I could recommend. In particular, could these huge construction sites be made attractive to Great yellow bumblebees? 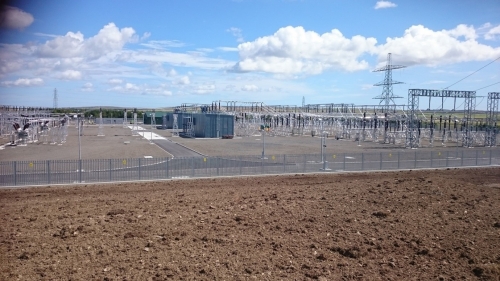 Caithness is home to one of the last mainland populations of these ultra-rare bumbles. For the last two years, I’ve been running a project to style Thurso the UK’s first Great yellow bumblebee town, and Caithness as bumblebee friendly as possible. I’ve worked with schools, farmers, community groups, volunteers and recorders – so working with a massive construction company like SSEN was something a bit different for me. Every time I walk on site, I have to swap my sun hat for a hard hat, fleece jacket for a high-vis, sun glasses for safety specs and walking shoes for steel toe capped boots. 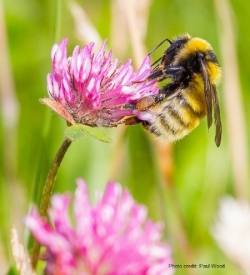 After a walk-over with Angus back in 2015, I did some research and emailed some recommendations back to him. For a project of this size and scale, a tailored wildflower mix was appropriate. SSEN wants to reseed around 10 hectares of earth bunds around the substation sites, but establishing wildflowers on the peaty soil will be difficult to achieve without the right plants which will tolerate exposure and acidic conditions. SSEN Project Manager Suzanne Mackay told me, “As a responsible developer, we are keen that our developments have a minimal impact on the communities and environments that we operate in.

“Prior to working with the Bumblebee Conservation Trust, I had very limited knowledge about Bumblebees and how endangered and critical they are.

I decided to ask Scotia Seeds for advice. As the only commercial supplier of native Scottish wildflower seed, they are usually the first port of call. They come up trumps again, and recommended a mix that will suit the conditions, and includes a good proportion of flowers that will attract Great yellows, such as red clover, common knapweed and meadow vetchling.

So here I am now – it’s a sunny Thursday at the end of July 2017 and we are waiting for the contractor to arrive. Donald McDonald runs a successful family business as a seasoned landscape and agricultural contractor, and has the necessary machinery to carry out the seeding work on this big scale. He uses a hydroseeder, which sprays the mixture of wildflowers in a preparation of green goo, which sticks to the soil and keeps the seed nice and damp until it germinates. Why green? Well, you need to know where you have sprayed, don’t you? In other areas he drills the seed to a very shallow depth and rolls it in, ensuring the seed has contact with the soil and won’t blow away before it has a chance to germinate (we get some very strong winds here in Caithness – hence all the renewable energy generation). 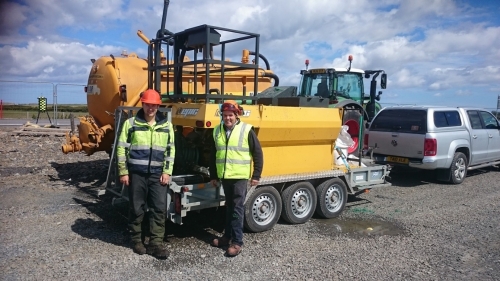 I hope to be able to monitor the site in years to come. Who knows, maybe a new colony of Great yellows might even set up home? Watch this space!