Our Science and Research

The Bumblebee Conservation Trust is a science-led organisation, and we lead the UK’s only standardised abundance-based survey of a major pollinator group – BeeWalk – with many sites monitored on a monthly basis through the flight season. We are always keen to collaborate on bumblebee projects, especially conservation-related, and regularly support under and post-grad students as well as working with academics from universities and research institutes across the UK.

We also collect and hold other data, notably from the Short-haired bumblebee reintroduction project based at Dungeness, Kent. This project has run since 2009, surveying bumblebees (including several conservation-priority species) and wildflower forage availability alongside carrying out conservation interventions.

BeeWalk
BeeWalk is a national recording scheme to monitor the abundance of bumblebees across the UK. The survey would be impossible without volunteers who identify and count the bumblebees they see on an hour’s walk each month from March to October. It can be a very pleasant way to spend an hour or two on a sunny day.

To get involved, check out the BeeWalk page or go straight to the recording website!  We produce a range of resources to help you, from a walk-through manual to video guides to identification pages.

BeeWalk generates data on the abundance of different bumblebee species on transects of known habitat across Britain, from March through to October. Flower visitation data is also collected at a subset of these transects. The data from BeeWalk is used to produce an annual assessment of how well the British bumblebees are doing (the BeeWalk Annual Report), as well as informing a range of scientific papers. For more details, see the Publications page. This provides a wealth of opportunities for analysis.

Students
We have worked with a range of undergraduate students on their dissertations, and with Masters students on projects. We also act as CASE partners on PhD projects and as advisors on others. For details of finished projects, please see our Publications page.

We’re always open to more, and have a range of possible projects outlined below – if you’re a student and you’d like to work on one of these (or a different project that you think we could help with), or more broadly if you’d like to collaborate with us or use our data in a project, please email our Science Manager on richard.comont@bumblebeeconservation.org

Road verges are estimated to cover 500,000 kilometres of land in the UK and have huge potential for bumblebee conservation. They can provide bees with food and nesting resources as well as improving habitat connectivity. However, bumblebees choosing to use verges may also be exposed to a number of pollutants associated with being in close proximity to traffic. This PhD project hopes to address some of questions surrounding the use of verges for bumblebee conservation, and to determine whether the benefits outweigh the costs.

For more information on this PhD project click here. 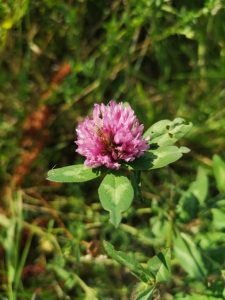 Peter Pike, BSc Animal Science, University of Canterbury. Investigating differences in pollen and nectar production between wild and agricultural-cultivar Red Clover (Trifolium pratense).
Red clover was once a dominant part of the British landscape, prominent in wild-flower meadows. These wild-flower meadows provided bee populations with forage essential for colony health and survival – nectar for carbohydrates and pollen for vital protein and fats.

Due to agricultural intensification in the 20th century, wild-flower meadows have dwindled – an effect that has led to a decline in populations of bumblebees and the extinction of two native species. In an attempt to safeguard the future of the 24 remaining bumblebee species, agri-environmental schemes have been implemented to recreate flower-rich habitat in areas such as field margins and grazing pastures. These schemes advise farmers to sow cultivar mixes into these areas as they are cheap and work well in farm rotations, yet no work has been done on the pollen and nectar content of these cultivars compared to those of the wild type.

If these cultivar mixes are to be successful in conserving bumblebee populations, they must be able to provide adequate quality and quantity of forage. Peter will investigate this by looking at both the nectar and pollen of cultivar and wild-type red clover. The amount of nectar produced by each type will be recorded and then analysed for sucrose content using a hand-held refractometer. Pollen will be collected from each type and analysed for protein content using a Bradford Assay. The results will then be analysed for differences between the wild and cultivar red clover. 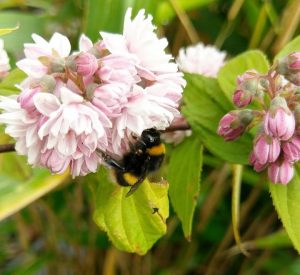 Jake Jones, BSc Countryside & Environmental Management, Harper Adams University. Investigating different forage usage by short, medium and long-tongued bumblebee species.
Bumblebees in the genus Bombus have got varying tongue lengths which can limit what the bees can forage on. They fit into three groups: short, medium and long-tongued. The four species which Jake’s dissertation will focus on are Ruderal and Brown-banded carder, both long-tongues and Biodiversity Action Plan (BAP) species. One medium-length tongue species the Red-tailed bumblebee, and one short tongued bee such as the Buff-tailed bumblebee. The dissertation will hopefully uncover key plant species that are a staple forage source for all three tongue lengths. This will hopefully show plant species which are commonly used by all four species for every month April to September.

The dissertation will also look into the importance of White Deadnettle for bumblebees. This species flowers twice a year, once in April and again in August, which are key times of year for the queens to start colonies, or enter winter dormancy. Soil analysis will occur during the summer to see if the plant has any limitations on where it can grow. This will be to investigate if the nettle can be encouraged and managed across the project area, as the flower seems to be very localised on the Romney Marsh. Overall the dissertation will help provide a clearer picture of which plants the bees depend on from April to September. 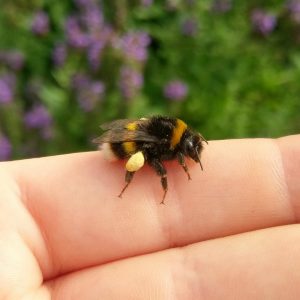 Hope Moran, BSc Animal Biology, University of Worcester. Quantifying foraging from pollen sampling of British bumblebees.
Bumblebee populations have declined dramatically in the UK over the past century: two species have gone extinct and a further two species (the Shrill carder and Great yellow bumblebees) have declined so severely that they are threatened with extinction.

These declines have led to increasing concern about pollinators. The main drivers are land management changes which remove flowers from the landscape. Consequently, current conservation interventions focus on the establishment of flower-rich areas. Monitoring has traditionally focused on the rate of flower visitation, largely ignoring the fact that a flower visit can potentially be for several reasons, only one of which is to collect pollen in order to provision the nest. In order to enhance the suitability of land management strategies, we need to develop monitoring techniques better able to link observable behaviour (such as flower visitations) to how bumblebees are actually using an area.

For this, establishing the interaction between pollen resources and usage is critical; bumblebee larvae feed almost exclusively on pollen, but, flightless, they are entirely dependent on pollen brought home by adult bumblebees. This project aims to develop a methodology for quantifying usage of foraging resources by comparing flower visitation data to the composition of pollen collected by bumblebees in the same area. We will develop this methodology using common bumblebee species, with the long-term aim of using the methodology developed to quantify foraging resources for rare bumblebees.

The project would involve catching bumblebees around the Malvern Hills; pollen grains will be sampled from plants and bumblebees caught within the project site, and flower visitation data will be collected. We will compare the composition of the bee-collected pollen to flower visitation rates to identify those plant species which are over- or under-represented in the bumblebees’ pollen usage versus expectations from flower visitations. This will allow recommendations on the feasibility of this monitoring methodology can be made.

The main dataset held by the Trust is that of the BeeWalk standardised recording scheme, which began in 2008.  It consists of transects walked on a monthly basis by volunteers who record the species and abundance of the bumblebees they see. The survey covers England, Wales and Scotland, and the dataset also includes standard habitat and land-use categories data selected by the volunteer. A substantial number of the BeeWalkers also record flower visitations by the bees they record.  The dataset is available via https://figshare.com/articles/BeeWalk_dataset_2008-19/12280547.  The Trust would be keen to be involved with any research using the data and if used, it should be cited (for details, see the ‘cite’ button on the link) and a copy of the research forwarded to the Trust.

There are a number of interesting questions which could be asked of the BeeWalk data and some which Trust staff have come up with are given below (n.b. definitely not an exhaustive list).

Away from BeeWalk, the Trust are always interested in bumblebee research, especially that which relates to the identification, ecology, or conservation of the species.

A major ID/ecology question at the moment revolves around the White-tailed bumblebee complex (Bombus lucorum, Bombus magnus and Bombus cryptarum), which are only reliably separable using genetics:

These questions (and plenty of others) rely on accurate field observations backed up by genetic analysis of specimens to species.