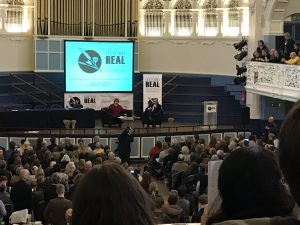 BBCT has had a presence at ORFC for the last few years, and this year four members of our Conservation and Science team attended the event. Why are we placing a focus on attending the ORFC? In order to deliver habitat for bumblebees we work closely with farmers and other food producers and landowners, and so it is vital that we have an up to date knowledge of sustainable agricultural techniques.

The programme of the conference this year addressed a very wide range of issues, and the organisers draw on speakers and case studies from around the world. High on the agenda this year was an address from Michael Gove, Secretary of State for the Environment, on Brexit and the Future of Farming. Mr Gove talked about funding for farmers and landowners who replenish natural capital and engage in environmentally sustainable practises, stating that we need a resilient environment so that in the future we can continue to produce food. Whilst only relevant to England (as these matters are devolved to Wales, Scotland and Northern Ireland), these messages are positive in terms of the future of farming but more clarity on the real outcomes of the ‘Agriculture Bill’ are needed urgently. The idea of public money for public goods was a theme which came up regularly at the conference. Indeed, Mr Gove made it clear that he wants people to recognise the link between support given to farmers and the public benefits they provide.

The conference also held some positive messages about the potential benefits to farm business and farm resilience if farmers can move towards sustainable farming techniques. For example using green manures and cover crops, reducing stocking levels, and reducing the use of expensive and damaging chemicals such as pesticides, fungicides, insecticides and nitrogen fertilizers. Reducing input and stocking levels can make sense from a business perspective, but also nature friendly farming is a big selling point for food and other agricultural products. 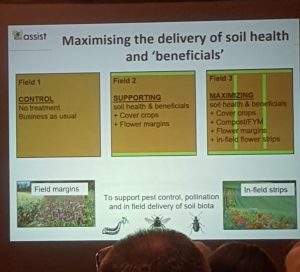 Another key theme running through the conference was the idea of a generational shift. The average age of farmers now is 58 years old, with 30% over 65, and only 3% under 35. There are thousands trying to enter farming, and many of those are interested in sustainable farming techniques. We are seeing a new way of thinking about farming providing food and environmental benefits. It is positive to see a shift in focus from maximising productivity through increased intensive farming, to the use of technology to maintain productivity in a more sustainable way. For example, through precision farming to reduce inputs (e.g in terms of fertilisers, pesticides etc), and developments in managing pests biologically. BBCT staff attended a workshop on various methods of weed control using agroecological approaches. One key message from that workshop was the current monoculture based farming systems actually help weeds to thrive.

The Conservation and Science team are now looking at how we might be involved with the conference next year, maybe with a stand or workshop session if possible.