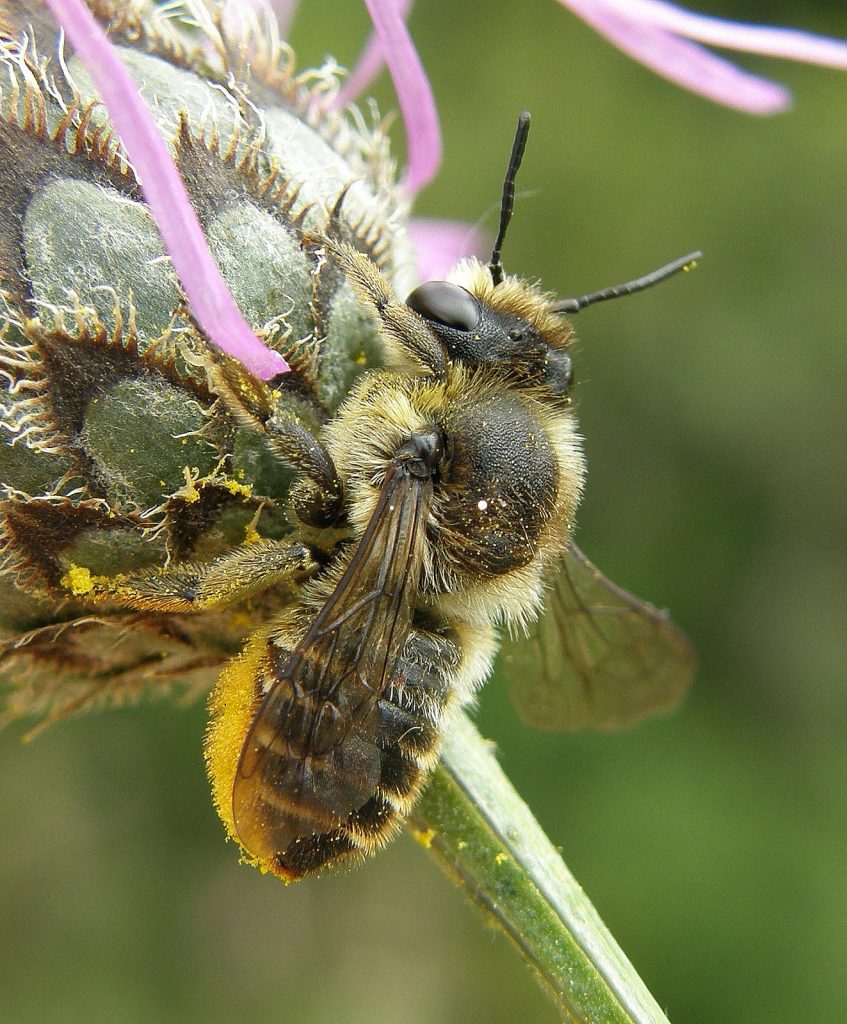 Patchwork leaf-cutter bees are one of our most common garden leaf-cutters. As their name suggests the females are known for cutting out sections of leaves which they use to build cells for their young to develop in. They are fascinating bees to watch and will happily make their homes in solitary bee hotels positioned in a sunny spot in the garden. 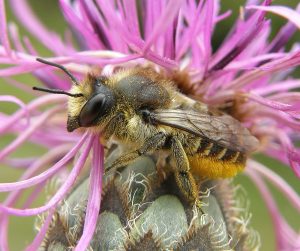 Males are harder to identify. They are similar to females, although slimmer, with more hair on their thoraxes and between their abdominal segments, with a general fluffier appearance. They lack the orange pollen brush under their abdomens and so can be difficult to tell apart from other male solitary bees, especially other leaf-cutters. Over time their light brown hair can fade to silvery-white.

Females are similar in size to honeybees, with light brownish hair around the sides of the thorax and between the abdominal segments. Aside from their leaf-cutting and carrying behaviour, their most distinctive feature is a bright orange pollen brush on the underside of their abdomen. From overhead this can look like a sort of orange halo around the abdomen.

Commonly found in lots of different habitats from coast to mainland, common in gardens and parks. They nest in existing holes or cavities, especially those in sunny south-facing locations. This includes natural cavities like bramble stems, dead wood and manmade structures like window frames, air-bricks and solitary bee hotels. They will feed on many flowers including knapweed, thistles, brambles, burdocks and various legumes. The females tend to collect leaves from roses, willowherbs, birch trees, ash trees, horse chestnuts, lilacs and honeysuckles.

Seen from June to early September. These bees are common throughout much of the UK, especially across England and Wales. Records extend to Central and Highland regions of Scotland. Few records from Ireland.

If you spot a bee surfing on a green disk in mid-air – you’ve more than likely spotted a female leaf-cutter bee. The females relentlessly collect sections of leaf which they chew into a pulp and mix with saliva to create the walls of a cosy cell for their offspring. Inside each cell she will lay an egg and provide it with a mixture of pollen and nectar on which to feed. She then seals up the cell before moving on to the next one, before finally plugging the hole to the whole cavity with more leaf pulp. Her young will develop over winter and emerge the following year.