Recording bumblebees and other pollinators in my garden, by Steve Hull

I’ve always loved wildlife. Collecting wildlife cards from packets of tea and reading Observer’s Books set me off on that course, with little other encouragement at eight years old.

I try to make my own garden and nearby community woodlands, where I lead work parties, as good a habitat as I can for all sorts of species. I have also persuaded the local Moray Council to agree to some special amphibian ladders in some of the drains and they work very well and I now have several amphibian hibernacula around the garden. BeeWalks fit into that connection with my local habitat very well.

Although lockdown has meant I have been unable to record on my BeeWalk transect, it has opened up the opportunity to record various other species within my garden. 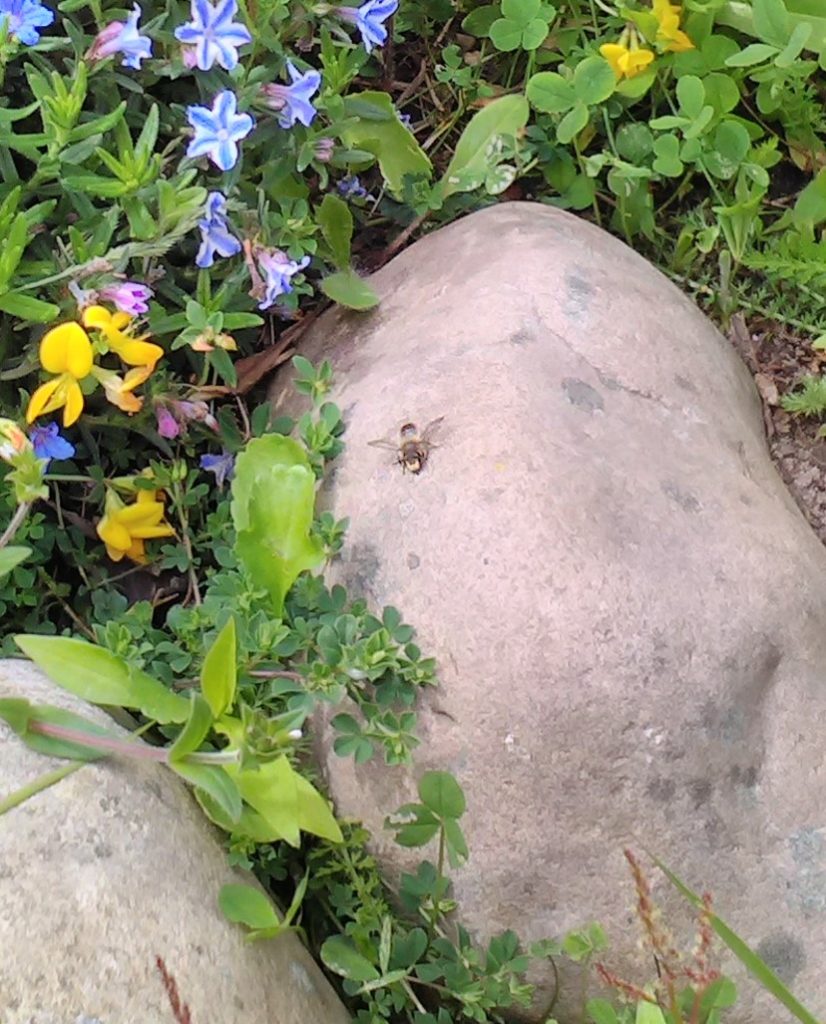 Here in Forres in northeast Scotland, after probably the wettest February I’ve known, followed by a normal sort of March with quite good queen numbers, April was a very dry and rather cold month with the drought exacerbated by very strong dry winds. So, there wasn’t a lot of insect activity until some much-needed significant rain in early May. My watered garden thus had advantages over the parched countryside in April and I was pleased that two queens made homes in nest sites I had created and furnished with old Blue and Great tit nest material. One was an Early bumblebee (Bombus pratorum) under a rock with a plastic pipe entrance. The other nest was in a wooden box screwed to a dead tree which was also intended for Early bumblebees but became occupied by Tree bumblebees (Bombus hypnorum) which came as a big surprise this far north.

Another new record for Forres was a possessive little flower bee called the Fork-tailed Flower Bee (Anthopora furcata) who fiercely defended his flower patch against all comers, including bumblebees much bigger than him. Sometimes he even grappled with them and they tried to use their legs to push him away but usually gave up to forage elsewhere. I read that this species likes to nest in rotten wood so I’m pleased that I have plenty of piles of that around the garden. I wonder if the bumblebees’ instincts to avoid small insects like the parasitic Conops flies with “sinister” intent to lay eggs within them, may make them wary of the Anthophora? I have seen Conops flies in the garden in previous years and once saw one fall to the ground dead after an aerial encounter with a worker Common carder bee (Bombus pascuorum), presumably stung. I am glad they don’t always have things their own way, although I know that’s not a very scientific attitude.

I had more time during lockdown to catch things and put them in the fridge for ten minutes to get close up images, to then send pictures to NESBReC – North East Scotland Biological Records centre. I also recorded a Willughby’s leaf-cutter bee (Megachile willughbiella) and tiny wasps called Ancistrocerus oviventris, which were nesting in some holes I had drilled in the dead tree.  Some unidentified tiny red and green jewel wasps were checking them out too. I hope to see some of each hatch out next year.