All photo credits to Steven Falk

Red mason bees are common and familiar throughout most of the UK. They get their name from their habit of nesting in cavities between brickwork, although they also happily frequent solitary bee hotels. Females can be seen harvesting mud, which they use to seal up their nest cells, allowing their young to safely develop, keeping them nice and snug over winter. 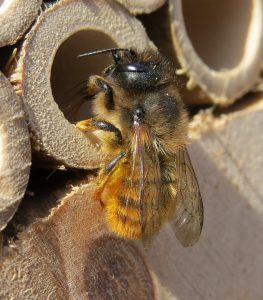 Males are similar to females, although they are slimmer and have white hair on their faces. Their antennae are noticeably longer and can appear spindly. The orange on the abdomen can also be very bright.

Females are fairly easy to recognise. They have black-haired and box-shaped heads with distinctive inward curved horns on the top which is not seen in any other British species. They have brown-haired thoraxes which can look quite sparse in the centre, and orange-haired abdomens.

Commonly found in urban environments, especially gardens and parks. They nest in existing holes or cavities, especially those in sunny south-facing locations. This includes cracks in mortar joints, window frames, air bricks, as well as natural cavities in bramble stems, dead wood and vertical cliff or soil faces. They will feed on many cultivated garden plants and spring flowering shrubs and trees, especially apples and pears. They also visit agricultural orchards and oilseed rape fields and are renowned for their efficiency as pollinators.

Seen from April (sometimes late March) to July. These bees are common throughout much of the UK, especially in lowland urban environments across England and Wales. Records extend to central Scotland up into Perthshire. Recently found in Ireland.

Rather than collecting pollen and transporting it on their legs like many other bees, Red mason females (along with other Osmia species) collect pollen in hairs on the undersides of their abdomen, in a structure known as a pollen brush. When the pollen brush is full, the underside of the bee can look very bright and vibrant, depending on the colour of the pollen collected.