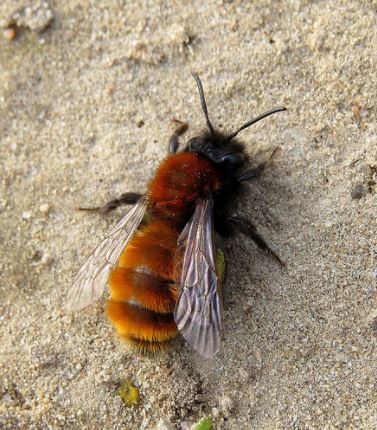 Tawny mining bees are one of our most recognisable spring-flying solitary bees with dense orange/red hair, although the males are not as striking or noticeable as the females. These mining bees can be found nesting in large groups and can be common in urban environments and garden lawns. 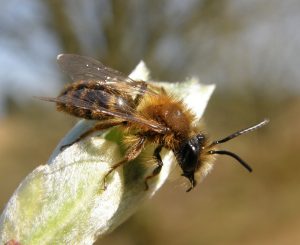 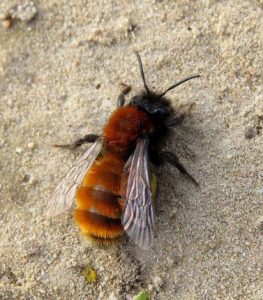 Males are much harder to identify. They are smaller and thinner than the females, their hair is browner and not quite as dense. They have protruding jaws, although can be difficult to distinguish from several other similar looking mining bees without close inspection.

Found in a wide variety of habitats with no real preferences of note. These bees are commonly found in gardens and parks, creating their nest cavities along south-facing embankments with sparse or short vegetation, including managed lawns. They feed from a wide variety of flowers including buttercups, dandelions, hawthorn, blackthorn, maple, willows and fruit trees.

Seen from March to June. Commonly found throughout most of southern Britain with increasing records in central Scotland, and a few from Ireland where it is much scarcer.

The Large bee-fly (Bombylius major) is known a parasitoid of Tawny mining bees (as well as other mining bee and some solitary wasp species). Once mated, the bumblebee lookalike fly hovers in front of an open nest cavity and flicks its eggs inside with great precision and skill. Its offspring will hatch in the nest and consume the stored pollen, as well as the young solitary bees (or wasps) inside the nest. It’s a good job bee-flies are excellent pollinators themselves!