Taking photos of the bees you see is a really useful thing to do – in particular, it is a great way to confirm your sightings, especially with scarcer species that you are less familiar with.

Although it is very useful, seeing a photograph is still second-best to having a specimen in the field or in the hand. Cameras and lighting can alter colours, and supplementary information is lost – size, behaviour, habitat, location, time, date, and movement/flight characteristics can all be important in getting to the right species. What’s in the photo is all we have – there is no way to see the bits that aren’t shown, or aren’t in focus, and very limited opportunity to zoom in on smaller features. That means getting the right bits in-shot and in focus is crucial.

Bumblebees aren’t the easiest things to ID from photos, as they have useful ID features scattered all over their bodies. Typically, when on flowers, they curl up into a semicircle, hide their head and tip of the tail, and tuck their legs in, which hides some of the most useful features. The best way to make sure your mystery bee is identifiable from photographs is to take several, from different angles, showing as many ID areas as possible. 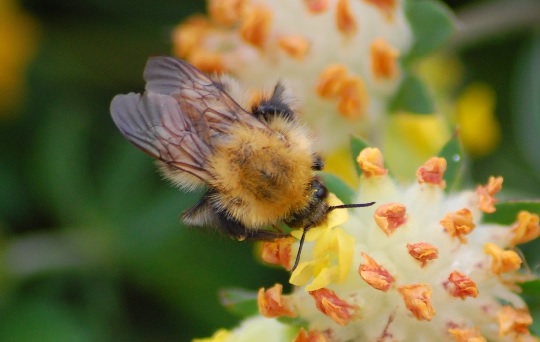 We can see the thorax well, and the head well enough, but most of the abdomen is hidden, including the very tip of the tail. The antennae are clearly present, but you would struggle to see details of the segments, and all the useful features on the hind legs are hidden. 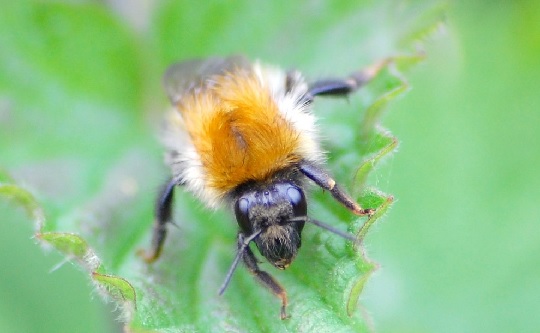 The presence and colour of facial hair is important for several species, particularly in deciding the sex of the bee.

The antennal segments are also useful for this – males and females have different numbers of segments, while the shape of some of the antennal segments can be used to split some species pairs, particularly males of the Gypsy and Southern cuckoo bumblebees (Bombus bohemicus/vestalis)

Additionally, the legs carry useful ID features for some species – for example red hairs fringing the pollen basket split the Red-shanked carder (Bombus ruderarius) from the Red-tailed bumblebee (Bombus lapidarius), and the spines are also useful for some species. 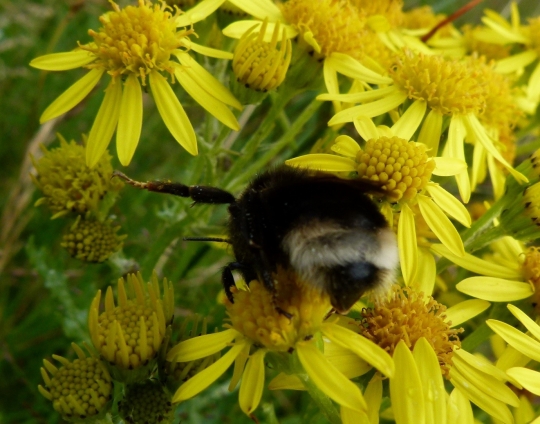 Tail colour is usually very important in bumblebee ID. It can often be seen from above, but bees on flowers often curl round so that it is not always obvious, particularly with species that don’t have much colour to the tail.

Also, several species have two-tone tails, with a different colour on the very tip.

Tail shape is useful to help sex the bee – males have a blunt, rounded back end while females come to a point, which can help make sense of other ID pointers.