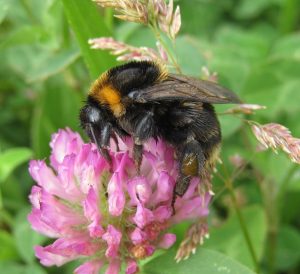 A formerly-widespread species which underwent a catastrophic decline through the 20th century and was last seen in the wild in 1988 at Dungeness, before being declared extinct in the UK in 2000. A reintroduction project began at Dungeness in 2011 using queens from Sweden and workers have been seen in several successive years at the time of writing. The species is very variable, with a white to buff-coloured tail and a yellow-black-yellow thorax (although the second band is sometimes lost in females). Males generally have two buff-coloured bands on the abdomen though the extent of these varies from virtually non-existent to covering almost the entire abdomen. Queens and workers generally have a broad first yellow abdominal band and a narrower second band, though the extent of each of these varies.