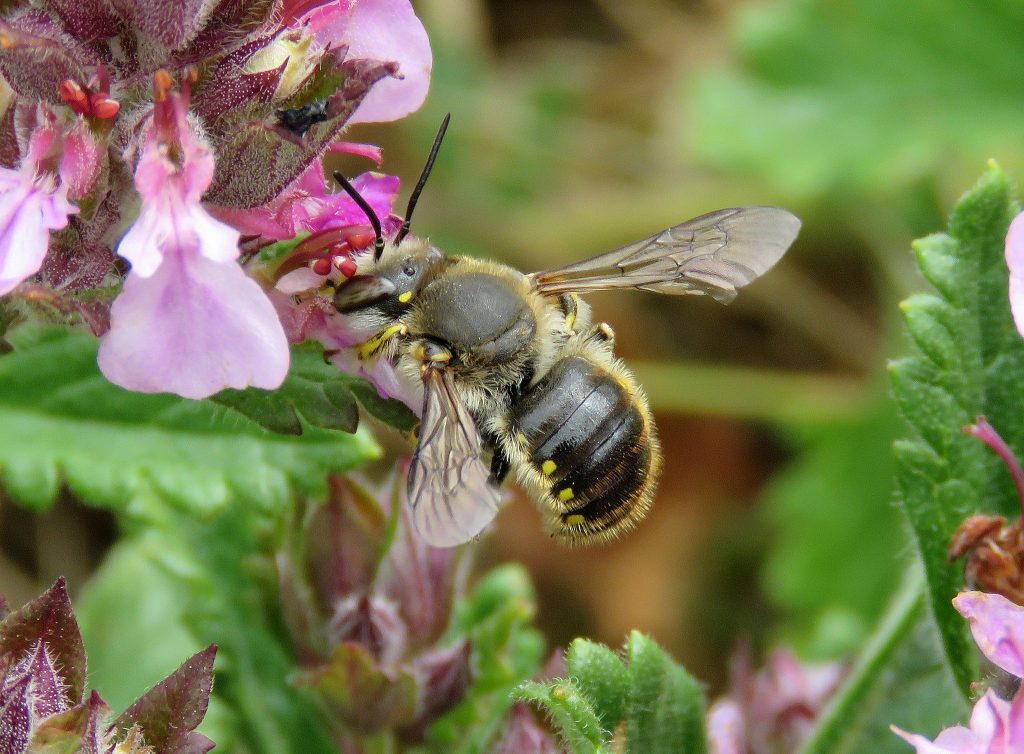 Wool carder bees are very distinctive bees with yellow spots down the sides of their abdomens. They are one of the few bee species in which the male is larger than the female. Females comb wool fibres from plants to use as nesting material, while males fiercely guard areas of these plants for potential mates.
All photo credits: Steven Falk 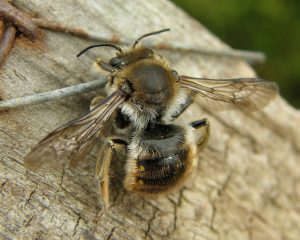 Males are large, with a series of yellow spots down the sides of the abdomen, making them very distinctive. They also have visible spikes at the end of their abdomen. They have pale hair around the sides of the thorax and abdomen, and on the head. They are known for their territorial behaviour and will fiercely battle any other insect that invades their patch of flowers, which they are keeping for potential mates. 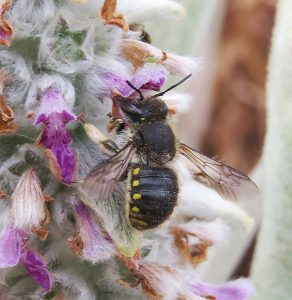 Females have similar markings to males, but are smaller and less hairy, and lack the abdominal spikes. They collect wool fibres from various plants and can be seen transporting silvery clumps of these fibres to their nesting cavities.

Commonly found in lots of different habitats, especially gardens containing their favoured plants, also present in heathland, woodland rides and clearings, wetlands and river banks, soft cliff areas, chalk downland and brownfield sites. They nest in existing holes or cavities, including hollow stems, dead wood and human-made structures. They will feed on many flowers including labiates like Lamb’s-ear, Black horehound, and legumes like vetches and Bird’s foot trefoil. The females prefer to harvest fibres from hairy plants such as Lamb’s-ear, Great Mullein and Yarrow, which is where males are more likely to be encountered.

Seen from May to August. These bees are common throughout most of southern England, and on the south coast of Wales. They are scarcer elsewhere but records exist from Scotland and Ireland.

Male Wool carder bees may not have a sting but they do come equipped with a set of spikes on their tails. They will fiercely guard a patch of flowers for their female suitors and chase, head-butt and wrestle any other insect, which dares to enter their territory. This often involves crushing a trespasser (very often to death) against their spiky abdomens.