This month our bumblebee world tour stays in South America, although we are heading north from Patagonia into the Amazon basin, where our species in the spotlight is the Amazonian bumblebee, Bombus transversalis. 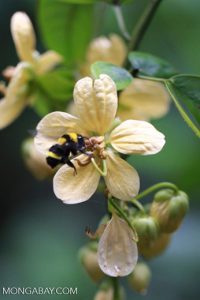 Colour pattern: Queens and workers are black with two bright golden-yellow bands on the thorax, one yellow band towards the rear of the abdomen and a black tail. Males have similar banding, although the yellow is paler and the bands are more extensive on the thorax.

Bombus transversalis is an impressive Amazonian specialist which exists in the tropical rainforests and wet lowlands of the Amazon basin. One of the most fascinating things about this species is its ability to survive and thrive in the most challenging of environments. Most bumblebees living in the tropics are known to operate at cooler, higher altitudes, and with good reason, the Amazon basin is well known for tropical temperatures, near maximum humidity and receiving copious amounts of the wet stuff (they don’t call it a rainforest for no reason)! Given that bumblebees evolved in temperate regions, it’s not hard to see then, that nesting on the rainforest floor is possibly one of toughest tasks for any bumblebee species on earth. Even if they can successfully avoid being flooded and washed away, they then have to raise their young in extreme temperatures and high humidity, compete for food in one of the most biodiverse places on the planet, and evade predation from numerous potential foes, including army ants! Bombus transversalis on top of a nest in Peru, in the Tambopata Reserve, along the Rio Tambopata in the Madre de Dios Region. Photo credit: Sydney Cameron

To deal with these challenges Bombus transversalis must build a unique nest. The first step is for the nest-searching queen to find the perfect spot – she needs somewhere on dry land that is unlikely to flood and has some existing structures of roots and shoots. These structures are vital foundations for the queen and her new colony to build their home around – a construction which must be able to withstand daily deluges and an annual precipitation rate of up to 3000 mm. To make the site waterproof Bombus transversalis workers engage in a unique behaviour of foraging for leaves, often by sweeping short trails or areas in pairs. Using their mandibles, they then cut the leaves into manageable pieces and weave them into a roof canopy around the existing supports. The end result is a large dome of interwoven leaves which is nicely camouflaged among the leaf litter of the rainforest floor. This thick thatched roof prevents water from getting in, and also means that potential predators like army ants must come through the sole opening, where they will be faced with several guards.

Professor Sydney Cameron who has spent time studying these fascinating bumblebees described the above nest in detail: " The size of this particular nest canopy is 86cm left-right, 69cm front-back, 35cm high and 5cm thick. It is constructed of leaves, small twigs and rootlets, interwoven to fashion a conical protective canopy, which covers the brood beneath. It is entirely waterproof and constructed by a behavioral caste of workers, who also maintain the nest canopy, keeping it clear of debris that may fall from above. Note its striking resemblance to some formicine (wood ant) nests."

Inside the nest there are more leaf layers to the canopy and an ingenious air space before the last layer which allows the bees to control the humidity, leaving the internal chamber completely dry and perfect for incubating brood. Colonies which get this bit wrong have damp nests which are prone to fungal growth. Constant temperature management is key and there will often be bees positioned at the edge of the nest using their wings to fan cool air inside to prevent the nest from overheating.

Successful colonies grow to full strength during the wet season and switch to rearing new queens and males once the dry season begins. Although their life-cycle is seasonal with colonies dying out during the dry season, their nest sites are often so well-built that they remain in place for several years. As such it is not uncommon to find a new queen starting a new colony in a pre-existing nest – something which is fairly unusual for most other bumblebees, but likely gives Bombus transversalis queens a great advantage in the Amazon.

Bombus transversalis is a true pioneer bumblebee species. Through its unusual nest construction, it has managed to survive in one of the toughest places to live on earth.

Many thanks to Paul Williams of the Natural History Museum, London, and Sydney Cameron of the University of Illinois, Illinois, US, for their help and advice.