This month, Bumblebees of the world returns from across the Atlantic to feature Cullum’s bumblebee (Bombus cullumanus), a Eurasian species which is sadly no longer found in the UK and has experienced drastic declines across the rest of Western Europe. 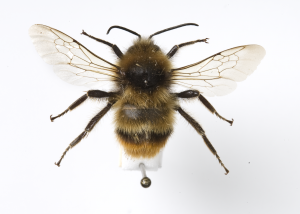 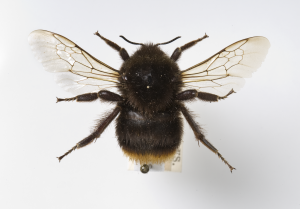 Colour pattern: In Western Europe, queens and workers are black with red tails and look very similar to Red-tailed bumblebees (B. lapidarius), although queens are smaller and sometimes have a very faint yellow band that can be seen at the collar.

Males have a dull yellow collar and bands across the lower thorax and majority of the upper abdomen with a red tail (similar to some brighter Ruderal bumblebee (B. ruderarius) males).

Cullum’s bumblebee, named after 7th Baronet, Sir Thomas Cullum, a medical doctor and well-respected natural historian from Suffolk, was described as new to science by William Kirby in 1802 after an interesting striped and red-bottomed male was spotted in Suffolk. It was not until 1926 that the connection was made between the yellow-banded males and the black females with red tails, which are difficult to separate from the similar, more widespread Red-tailed bumblebee (Bombus lapidarius). 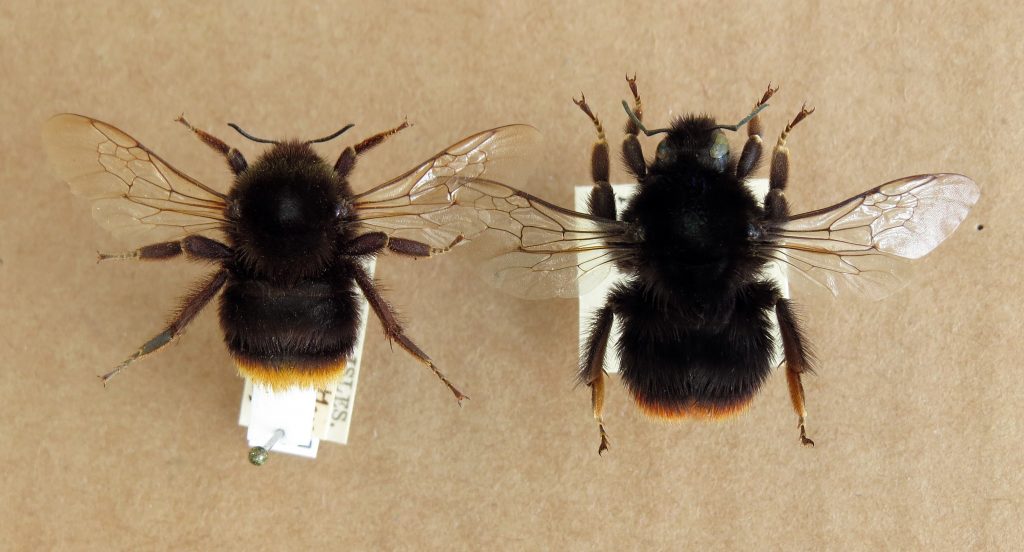 Bombus cullumanus belongs to a broader species group of closely related species known as the cullumanus­-group. The species group has been the source of much debate amongst taxonomists and there have been several interpretations of the number of species within the cullumanus-group, but DNA barcoding has been able to provide a much clearer answer.

It turns out that Cullum’s bumblebee can be exceptionally variable in terms of colour pattern and because of this it has been classified as several separate species from different geographic locations. Williams et al. (2012) set out to sequence the DNA of some bumblebee specimens within the cullumanus-group and found that four bumblebees which had been classified as separate species are actually parts of Bombus cullumanus, which is known to be declining steeply in Western Europe (described in the fact file). The following ‘species’ have therefore been reclassified as parts of Bombus cullumanus: 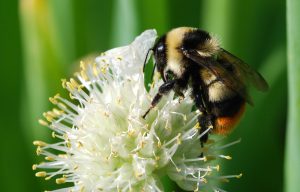 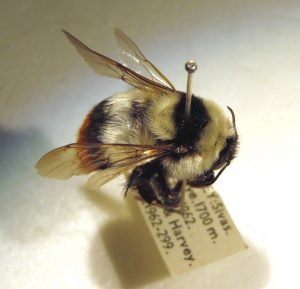 The last confirmed sighting of Bombus cullumanus in the UK was a male on the Berkshire downs in 1941, making it one of two species that have likely gone extinct from the UK in the last 80 years (the other being the Short-haired bumblebee, Bombus subterraneus). It has similarly vanished from the Netherlands, Belgium, France, Germany, Sweden and Denmark.

Although this is undeniably sad news, the new understanding that the species is much more widely distributed than initially thought (albeit in different colour forms) means that in conservation terms, it is doing better than initially feared, especially in Russia and Central Asia where it can be common in grasslands. In fact, the genetic work by Williams and colleagues indicated that another species within the wider cullumanus-group, Bombus unicus, may actually be worse off. They are calling for urgent surveys to help assess the status of Bombus unicus, which seems restricted to the far East of Russia and has only ever been found in very low numbers.