BeeWalk is the Bumblebee Conservation Trust’s national bumblebee recording scheme. The scheme monitors the abundance of bumblebees across the UK. Read on for the 2019 results.

2019 was the biggest year yet for BeeWalk since the Trust started the scheme in 2008. The 2019 records are summarised in the latest BeeWalk Annual Report here.

Across Britain almost 500 people, mainly volunteer citizen scientists, walked transects at 587 different sites, an increase of 38 over the previous year. BeeWalkers submitted nearly 31,000 records and counted more than 97,000 individual bees during the year.

BeeWalk is unique as it allows staff at the Bumblebee Conservation Trust to see patterns and trends that can’t be extracted from any other dataset. The information collected is crucial to understanding that key question “How are the bumblebees doing?”.

The positive story coming from analysis of the 2019 results is the recovery of some of the UK’s rarest bumblebees. Three species – the Shrill carder bee (Bombus sylvarum), Brown-banded carder bee (Bombus humilis) and the Ruderal bumblebee (Bombus ruderatus) – are Continental European species at heart, and reach their northern range edge in Britain.  All three appear to be responding positively to the combination of targeted conservation work and recent warm summers, and all three did relatively well during 2019.

The Shrill carder bee had its best year since BeeWalk began. This is likely to be due in no small part to the land management changes advised by the Bumblebee Conservation Trust’s Making a Buzz for the Coast and Back from the Brink Shrill carder bee recovery project teams, with very high numbers of the bumblebee recorded on some Kent sites.

The Brown-banded carder bee (Bombus humilis) showed a small decline from 2018 – the species  does seem to like hot weather – but this was counterbalanced by the species continuing to spread northwards. During a BeeWalk training day the Brown-banded carder bee was found at a new site – Croome Park, in Worcestershire – and analysis in the BeeWalk report shows that this now rare species appears to be recolonising its former range within the UK. 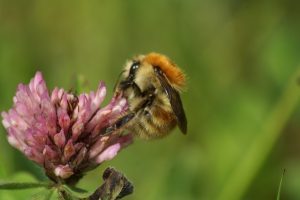 Overall, 2019 was an average year for bumblebees in general although there were seasonal patterns in abundance records. During the warm spring most species reached above-average numbers. Early-emerging species did particularly well, with the Early bumblebee (Bombus pratorum), Tree bumblebee (Bombus hypnorum) and Buff-tailed bumblebee (Bombus terrestris) reaching noticeably high numbers and having some of their best years since monitoring began.

However, June was cold and wet, with poor conditions for foraging bumblebees. Spring nests were finished off, and various species took a hit as elderly workers died off and could not be replaced. The average number of bumblebees seen per kilometre of transect walked almost halved, from 30 in June to 17 in July.

The rest of the summer was warm as well as wet, and flowers bloomed.  Late-emerging bumblebees were able to recover slightly, although the two common late-flying species – Common Carder (Bombus pascuorum) and Garden bumblebee (Bombus hortorum) – both ended up having poor years overall.

Dr Richard Comont, Science Manager said “It’s fantastic to see almost 500 people go out each month to survey bumblebees. Without their efforts we would not be able to understand how bumblebees are doing across the UK, which is vital to allow us to see patterns each year and where we need to focus our efforts to protect different species.”

The goal of the BeeWalk programme is to be able to reliably evaluate the trends in British bumblebee populations. The latest BeeWalk report is available here https://www.bumblebeeconservation.org/publications/

To become a BeeWalker and help monitor the UK’s bumblebees please visit www.beewalk.org.uk

BeeWalk is funded by members and supporters of the Bumblebee Conservation Trust, including specific financial contributions from the Redwing Trust, Esmée Fairbairn Foundation, and Garfield Weston Foundation.