Making a buzz for the Coast boosts Kent’s bumblebee population

Kent has more rare bumblebees than anywhere else in the UK and is home to a nationally important bumblebee population. The county is now the focus of an ambitious project “Making a Buzz for the Coast”, led by the Bumblebee Conservation Trust. This week the project team held a celebration event attended by local town mayors, with a series of talks and a bee hunt in the gardens of Hempstead House.

The “Making a Buzz for the Coast” project received National Lottery funding through the Heritage Lottery Fund and thanks to National Lottery players, the project will restore and create habitat for our bumblebees and other pollinators. Spanning 135 miles of coastline from Dartford to Deal, the team aims to safeguard our rare bumblebee species, such as the endangered Shrill carder bee (Bombus sylvarum). Habitat and bee surveys will also be an essential part of the project to help build our knowledge, evaluate and monitor populations in the area.

Nick Mann, Trustee of the Bumblebee Conservation Trust, said: “There is a lot of goodwill towards bees generally but you might be surprised by the lack of actual action on the ground to conserve them. Kent has the highest diversity of bumblebees in the UK, including nearly all our our rarest species. Relatively recently you could see these species throughout Kent but now they are restricted almost exclusively to coastal areas, which the Making a Buzz for the Coast team is targeting. Remaining populations are small and isolated due to habitat loss and fragmentation, so are highly vulnerable to population crashes.

“We can do something about this and people need to feel they can take action. Projects like this give focus and tangible results.”

Rosie Earwaker, Bee Roads Officer from project partner Kent Wildlife Trust said: “North Kent has a good network of nature reserves along the coast as well as a lot of sites designated for their conservation value. These provide large areas of semi-natural habitat, which are connected by the sea wall network and therefore attract many of our rare bumblebees, including Shrill carder bee (Bombus sylvarum). It may also be partly climatic; the Thames Gateway has its own microclimate, which the bees may favour as it is one of the hottest and driest areas in the country. It’s fantastic that we have so many different types of bees in Kent, particularly these coastal hotspots of rare bees and this exciting new project will help to make sure they are protected and nurtured here.”

Engaging communities and gardeners is a vital part of the project. Kent Wildlife Trust will have a  “Garden with the Best Buzz” category as a part of its, already successful Wild About Gardens scheme .The project also aims to inspire future generations to value and protect our pollinators. “Plan Bee Schools Together” Kent County Council competition received 15 entries of both primary and secondary schools which had created bumblebee habitat within their school grounds. The schools will be visited by the council’s Allison Campbell-Smith, Cllr Sean Holden and MaB Outreach and Volunteer Officer Lauren Kennedy.

Konstantin Gospodinov from the Bumblebee Conservation Trust who manages the project, said: “We aim to safeguard rare bee populations in Kent by creating and restoring habitat along the coast and linking isolated populations together in the long term through the creation of flower-rich ‘stepping stones’. Habitat and bee surveys are an essential part of the project to help us build better data and monitor bee populations around the coast.

“We know that to really have an impact and make a difference for all our wild bees throughout the project area we need to reach as many people as possible. That’s why we will be running a wide programme of events, activities, competitions and training to highlight the importance of bees to Kent, to raise awareness of the rare species that we have right on our doorstep and most importantly of all, inspire people to take some action to help.”

Stuart McLeod, Head of Heritage Lottery Fund South East said: “We are delighted that, thanks to National Lottery players, this project can work to secure the future of some of the UK’s most rare bee populations. This pivotal project is sure to create a buzz amongst Kent’s communities with all the exciting opportunities on offer and we hope it will mobilise people to get involved and help to protect the natural environments on their doorstep.” 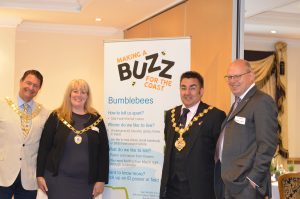 The “Making a Buzz for the Coast” project is working with the RSPB, Thanet District Council and Thames Water on five core sites to provide habitat for rare bumblebees and solitary bees. In addition, it will be working with Kent Wildlife Trust in Swale to improve roadside verges for pollinators, creating ‘bee roads’ and increasing habitat connectivity. Another key element is providing advice and supporting landowners, ranging from farmers and fruit producers to holiday parks, golf courses, smallholders and large estates. There will be free, bespoke information and advice on restoring and creating pollinator habitats.