What’s in a name?

Ever wondered how bumblebees came to be called bumblebees? It’s an odd sort of word. I don’t really think of bumblebees actually doing much bumbling about. They are usually far too busy working the flowers for nectar and pollen to feed the young larvae in the nest for wasting time ‘bumbling’*. 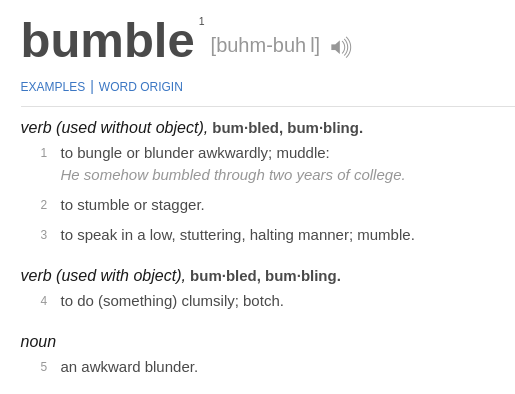 I thought I’d do a bit more research, and I looked at the names of bumblebees across the world in different languages, and also in British history. Bumblebees are such familiar and well-loved insects, it’s probably unsurprisingly there are several colloquial names in local dialects. 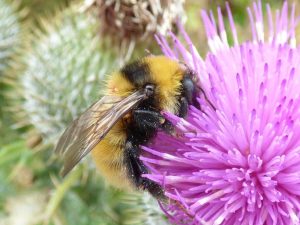 Have you heard of a  Drumbeldrone (Devon), Foggy Bummer, or Foggy Toddler (north east Scotland)? Back in the 18th century, you’d have heard it called a Dumbledore (the inspiration for J.K. Rowling’s character of the same name). In Welsh, it’s cacynen, and in Irish it’s bumbóg (which I love saying!). In Scots Gaelic, they are Seillan (pronounced Shay–len) and my personal favourite species, the Great yellow bumblebee – a rare specialist of Hebridean machair – is known as Seillan Mòr-Bhuide (shay–len more boo–ey).

There’s more! Here are a few of the many names for bumblebees from around the world: 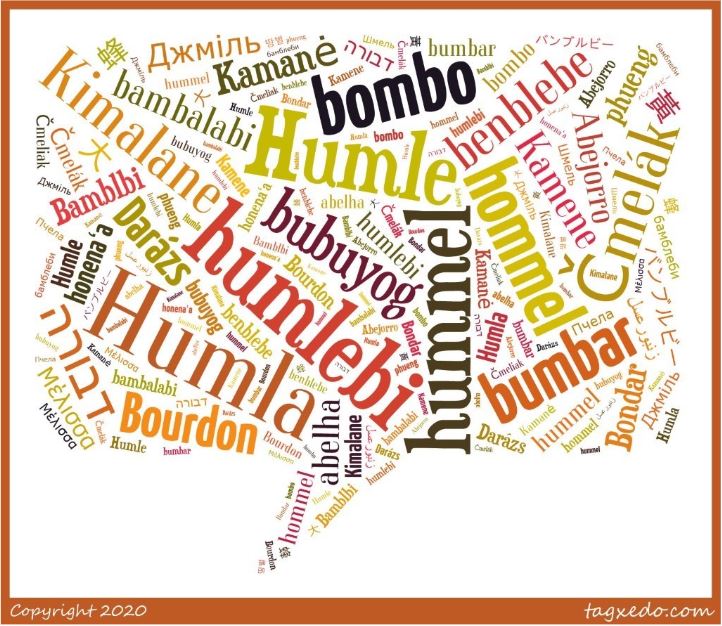 So, when did we even start calling them bumblebees? It’s probably much more recent than you think. Up until around 1910 they were known as humblebees. By the 1950s we called them bumblebees, possibly thanks to a story by Beatrix Potter who wrote a story which included Babbity Bumble who caused trouble by making mossy nests in the back garden of Mrs Tittlemouse. Naughty Bumble!

I also noticed that the English common names we use for bumblebee species tend to be connected with the identification features of the different species (e.g. white-tailed bumblebee, buff-tailed bumblebee, red-tailed, etc) whereas the Latin (scientific) names are more often more descriptive of the typical habitats where the species are found.

So, all this got me wondering. If I were starting from a blank slate to name the different species, how might I go about it? I might call the red-tailed bumblebee the “fire–tailed bumblebee”… or the carder bumblebee could be the “teddy bear bumblebee” because it looks to me just like a tiny flying bear. I might name the Great yellow the “Best of All bumblebee”, but some of my colleagues at the Trust might object!

So, what do you think? Do you have a favourite species? How would you name them? I’d love to hear your thoughts.

*Though, if you’ve seen any slow-motion video of bumblebees, you might think otherwise! Did you know they are actually built quite robustly because they often bump into things and bounce off them… that’s a thought for another time though.