This month we’ll explore a deep montane tropical forest in Asia, where Chawatat Thanoosing— a PhD student at Imperial College London and the Natural History Museum—is doing his research on the ecology of tropical bumblebees, to see the remarkable giant bumblebee, Bombus eximius. 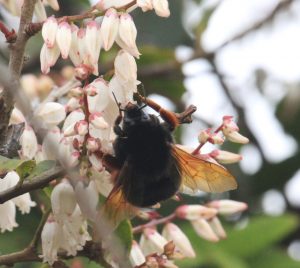 The impressive Bombus eximius is a broadly distributed Asian bumblebee, found across the Himalayas, Southern China, Taiwan island and in the mountain ranges of northern Southeast Asia, at mid altitude, from approximately 1000 m above sea level. Unlike common bumblebees in Europe (eg. B. terrestris), which show black and yellow striped patterns on their abdomen, B. eximius is often a predominantly black bumblebee with orange on their tail and legs, although sometimes the populations in Southern China and Taiwan have extensively orange abdomens as well.. This orange-colouring across the legs is in congruence with the original subgeneric group that this species was attributed to, Rufipedibombus, which means red-legged bumblebees, although it is now included as part of Melanobombus, distantly related to the European B. lapidarius.

Queens of B. eximius are some of the largest bumblebees in the world. The body length of the queen is approximately 3 cm long, similar in size to the Patagonian bumblebee, B. dahlbomii, in South America. Strangely, those big bumblebees show almost the opposite colour pattern between them. They have an orange thorax and abdomen with black legs, whereas B. eximius often has a a black body and orange legs. The two species have evolved independently in different lineages and different geographic regions.

The food preference of B. eximius has rarely been studied. In Thailand, this species has been reported visiting and pollinating some native orchids: Dendrobium infundibulum and Cymbidium insigne. Care is needed when identifying these bees because B. eximius is mimicked very closely by B. flavescens, a relative of B. pratorum. When B. eximius lands on an orchid flower, pollinia (a sticky orchid pollen mass) will either attach to its thorax (in D. infundibulum flowers) or abdomen (in C. insigne flowers). The cross-pollination of the orchids occurs when the bumblebee with attached pollinia visits another orchid flower. In addition, at Doi Inthanon mountain, the highest peak in northern Thailand, B. eximius has been observed to visit Hooker's St. John's Worts (Hypericum hookerianum), Som Pae (local Thai name for Vaccinium exaristatum), Rubus chevalieri and Saurauia napaulensis for food.

The IUCN conservation status of this bumblebee has not yet been assessed. This species still flies and hides in the shady forests of the mountains. Despite extreme deforestation, land use changes and heavy pesticide use in this region, no one knows whether the population of this bumblebee is decreasing or not. From the obvious changes in the environment, raising awareness and protecting bumblebees in this region are likely to be urgently needed. 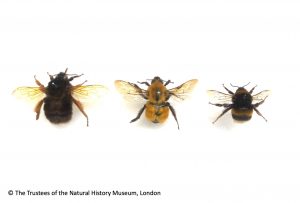 Comparing body size and colour pattern of queen between Bombus eximius (left), B. dahlbomii (middle) and B. terrestris (right). Photo: The Trustees of the Natural History Museum, London, and is made available under Creative Commons License 4.0. 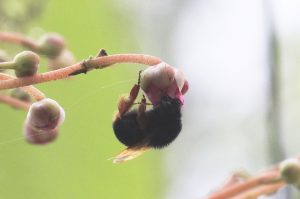 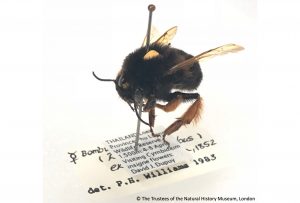 Bombus eximius with attached Dendrobium infundibulum pollinarium on its thorax. Photo: The Trustees of the Natural History Museum, London, and is made available under Creative Commons License 4.0.