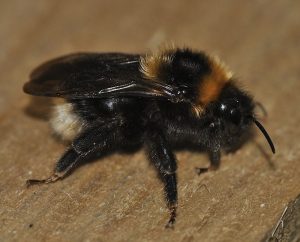 A large cuckoo species which parasitizes the nests of the Garden bumblebee (Bombus hortorum), and probably also those of the Ruderal bumblebee (Bombus ruderatus). Like all cuckoo bumblebees, this species does not collect pollen to feed offspring, and correspondingly neither sex has pollen baskets and there is no worker caste. It is found across the UK, though its northern distribution is largely coastal and it is only truly widespread in the south. Like the hosts, this species has a yellow-black-yellow thorax and the first abdominal segment is yellow (sometimes faintly so in females), with a black band between that and the grey-white tail.

Similar in appearance to the host species, the Garden and Ruderal bumblebees, but distinguished from them by having a much shorter face, only around as long as it is wide. The Heath bumblebee (Bombus jonellus) is also similar, but males have yellow faces (dark in the Barbut’s cuckoo) and queens and workers have pollen baskets, unlike the cuckoo.