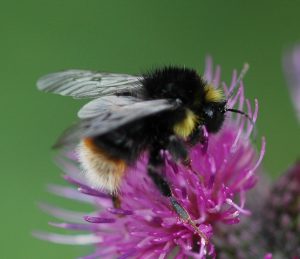 A widespread but highly localised species, found mainly in the north and west and associated with large areas of mid- and late-summer flowers. The yellow band at the front of the thorax is an intense, bright yellow and the white tail often has a beige hue at the front with a scattering of yellow hairs. In some males, this can increase to a peachy-orange suffusion of the front half of the tail.

Despite the English name, the ‘broken’ abdominal band is not a good ID feature, as the abdominal band frequently breaks through wear in similar species such as the White-tailed bumblebee (Bombus lucorum). However, in the Broken-belted bumblebee the yellow of the band leaks forward onto the first abdominal segment, giving the appearance of two crescent-shaped bars almost touching in the middle, rather than the neat rectangular transverse band of the White-tailed (Bombus lucorum) complex (which also have a pure white tail) and Buff-tailed bumblebee (Bombus terrestris). The male genital capsule and female mandibles are useful to check the ID, particularly of worn specimens.