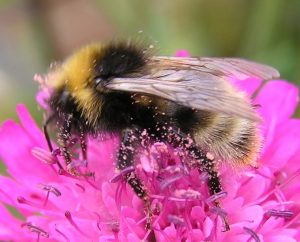 A widespread and often common cuckoo bumblebee, parasitic on the Early bumblebee (Bombus pratorum) and also probably on the Heath bumblebee (Bombus jonellus) and the Bilberry bumblebee (Bombus monticola). Like all cuckoo species, they do not collect pollen for their offspring, and so have no pollen baskets or worker caste. A small species, they have darkened wings, a yellow thoracic collar and a yellow abdominal band with a white tail, the very tip of which is orange (in males) or black (in females). Females also have a characteristic stance, with the tip of the abdomen very curled-up underneath, while males can sometimes show an extra yellow band at the rear of the thorax or at the front of the abdomen.

The lack of abdominal yellow side-patches separates this species from the Southern cuckoo and Gypsy cuckoo bumblebees (Bombus vestalis and Bombus bohemicus respectively), while the orange tail tip of the male splits it from the male Field cuckoo bumblebee (Bombus campestris).