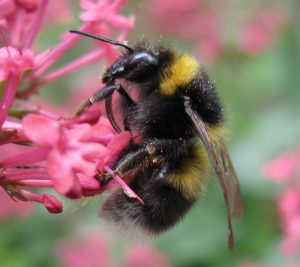 One of the ‘Big 7’ widespread and abundant species, found in a wide range of habitats across the UK and often frequent in gardens, where it is one of two common species found visiting foxglove. All three castes are similar, with a yellow-black-yellow thorax, a yellow band at the base of the abdomen, and a pure white tail.

The species is parasitized by the similar-looking Barbut’s cuckoo-bumblebee (Bombus barbutellus), but the cuckoo does not have pollen baskets. Both it and the Heath bumblebee (Bombus jonellus) also have round faces only as long as they are wide, whereas the Garden bumblebee has a face between 1.1 and 1.4 times as long as wide. The male genital capsule is useful to check the ID, particularly of worn specimens.