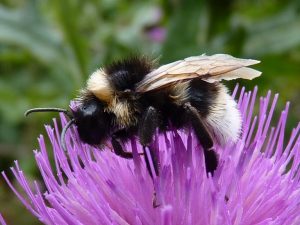 The Southern cuckoo bumblebee (Bombus vestalis) is very similar, but has more extensive yellow side-patches. Examination of the genital capsule is useful for accurate identification of males, which can also be determined by the ratio of the 3rd and 5th antennal segments (equally long in Gypsy cuckoos, 5th longer than 3rd in Southern cuckoos). Females can be identified by checking the degree of pitting on the underside of the tail (6th abdominal sternite) – heavily pitted and not shining in Southern cuckoos, smooth and shining in Gypsy cuckoos.