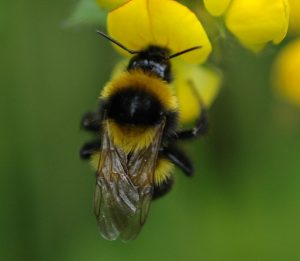 One of our largest bumblebee species, found only in the south of England and scarce even there after a considerable decline through the 20th century. Widespread across this range, but never abundant where found. All three castes are similar, with a yellow-black-yellow thorax, a yellow band at the base of the abdomen, and a pure white tail.