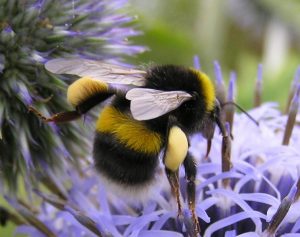 One of the ‘Big 7’ widespread and abundant species, found in a wide range of habitats across the UK, and one of the typical black-and-yellow species. The species has a lemon-yellow collar at the front of the thorax and another bright yellow band in the middle of the abdomen, with a pure white tail: males have bright yellow facial hairs and are often extensively yellowed, particularly in the thorax.